The small town of Scottsbluff, Nebraska (population 15,000) has welcomed home a champion.

In high school, Makayla Castro was an athlete for the Scottsbluff Bearcats. Today she has a college championship to her credit as the assistant coach of the Columbia International University Rams women’s volleyball team. The Rams won the 2021 National Christian College Athletic Association (NCCAA) title with Castro as the assistant to Head Coach Amber Haver, the NCCAA Division I Women’s Volleyball Coach of the Year.

“My first year at CIU has been great,” Castro told the Star-Herald newspaper in Scottsbluff. “We had an amazing season and I have learned so much from having such a diverse team. We have athletes from Puerto Rico, Brazil, France, Poland, Bosnia and Herzegovina, Colombia, Canada, Peru, and all over the U.S.”

Castro has made a positive impression on the players, including sophomore Alana Sanjurjo from Bayamon, Puerto Rico who calls Castro a role model.

“Coach Castro is a role model to me because of her knowledge of the game and how she supports each and every one of my teammates,” Sanjurjo said. “She takes time to explain things to us and guides us to being better players and people. She is always willing to listen to us and check on our well-being, both mentally and physically. Overall, Coach Castro’s competitiveness is inspiring to me; she motivates my desire to be better and reminds me why I love this sport.” 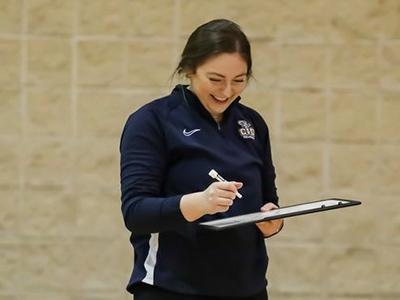