An Amazing Race on the CIU campus 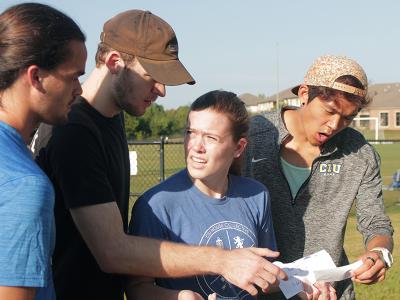 It took a lot of diverse talents to participate in the CIU version of The Amazing Race.

The event led four teams around the CIU campus on a Saturday in search of clues, solving riddles and performing a number of tasks — some of them quite unusual.

At Sessions Field where the CIU Rams play soccer, Amazing Race teams had to kick a soccer ball through targets. Near Hoke Auditorium, contestants had to create, design, and test an egg carrier to protect the egg from breaking as it was carried. They even had to complete a level in Super Mario at the Rossi Student Center.

The Amazing Race was organized by the student-led organization LVL99, a name taken from level 99 of video games. Its leader Nathaniel Rabon says the most challenging activity of the day was solving a logic problem. Only the Tofu Fighters were able to complete that activity.