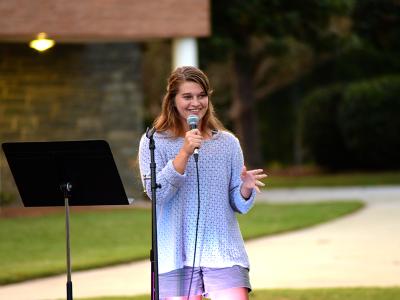 No two stories were alike, though all were written by the same Author.

A testimony and worship night, hosted by student-led club Fellowship of Christian Professionals, told of God’s faithfulness in the quietness of a prayer day, in the frigid swirl of a blizzard, in the sterile room of a hospital, and in the depths of exotic Libya. Cola Collective, CIU’s on-campus worship band, encouraged dozens of students gathered on CIU’s Quad, to respond in song to God’s faithfulness in the testimonies that were shared.

Geroge Huff, president of Fellowship of Christian Professionals organized the event in the spirit of CIU’s core value of Evangelical Unity, and welcomed the speakers: CIU students Rebekah Reinhard, Tiepeng Lyu, and John Jones along with CIU’s missionary in residence for 2019-2020, William Brown.

“I have personally seen stories turn into a sort of encompassing fuel for community,'' said Huff.  “When someone shares their life story it brings to light the depravity of a fallen humanity and the need for a righteous savior.”

Reinhard, a junior, discussed what it’s like being an athlete with an injury that’s kept her off the soccer field she loves. Encouraging students to fall into the arms of God, no matter what tempts them to resist, she read a prayer she’d penned, during one of CIU’s prayer days.

Lyu, a graduate student, shared how he’d surrendered his soul to God after a near-death, mountain climbing experience during a blizzard in China. With a snowy slope about him, he fell asleep, a “river of stars” above him in the night sky. Near frozen when waking his troubles weren’t over. He prayed to God. Battling the weather, he survived physically and was saved spiritually. Lyu felt a burden was lifted off his back, a burden that’s never returned. His wandering was over. He ended with Psalm 121:1-2

I will lift up my eyes to the mountains;

From where shall my help come?

My help comes from the Lord,

Who made heaven and earth.

Jones, a senior, came to CIU to study and grow in his faith. Then, the last week of school in 2015, he got a headache. The next day it didn’t go away. The next month it didn’t go away. In June, his head felt like it was being crushed, even obliterated. “Never ever in my life have I experienced pain like that,” John reflected. That’s when the doctors got involved. John’s life changed with a single phone call. He was stricken with a cancerous tumor. Months of pain-wrenching treatments awaiting him. His mother describes the treatments as “barbaric.”

“You would think after fighting cancer, I would be smarter and wiser and ‘holier than thou,” Jones said. By the grace and the will of God he was declared cancer free months later. However, Jones’ testimony didn’t focus on his battle with cancer, but rather the most deadly battle of all: his battle with sin.  He admitted, “I still make mistakes,” pointing his story back to God and warning that, “one’s secrets in the dark are dangerous.” He finished by  encouraging his brothers and sisters to seek Chrsitian help, to know the love of God, and to battle sin in their lives.

Missionary in Residence William Brown shared about the complications he felt within his home life as a young missionary kid in Libya. God was faithful in his situation, restoring relationships within his family. One verse that was instrumental in his testimony was Isaiah 54:10:

“For the mountains may be removed and the hills may shake,

But My lovingkindness will not be removed from you,

And My covenant of peace will not be shaken,”

Says the Lord who has compassion on you.

“If there’s one thing that I want to leave with you tonight, it’s God's love,” Brown told the students.

“During the event I saw athletes, faculty members, international students, commuters, recent alumni, and so much more!” Huff said, thrilled after the night was over. “The event wasn’t just a sharing of stories it was the glue that brought so many different backgrounds, cultures, and communities together as one body.”