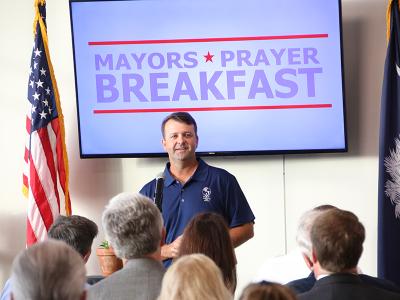 Are you making yourself available to God? And what’s your platform for making disciples and advancing His Kingdom?

Those were questions posed by Columbia International University Baseball Coach Jonathan Johnson to dozens of people gathered for the 2019 Lexington (South Carolina) Mayor’s Prayer Breakfast held in the club room at Lexington County Stadium where Johnson used to coach the Lexington County Blowfish, a summer league for college players.

But Johnson is probably better known for playing six season in the Major Leagues. He was selected in the first round of the 1995 Major League Draft to pitch for the Texas Rangers. His career would include playing for the Houston Astros, San Diego Padres and in the Atlanta Braves system.

Johnson told the prayer breakfast audience that he got a large signing bonus and knew he would “get paid a lot of money” to play in the Majors, so he “tried to focus on how God was going to use that, and what platform” he had to give back to God.

Johnson made a pact with fellow believer and Major League pitcher R.A. Dickey, that they would use their new careers for ministry, even though they didn’t know what that would look like. But with the help of a fellow Cuban baseball player, they would form “Honoring the Father Ministries” taking the gospel to the communist country, where baseball is popular.

By 2002, God impressed on Johnson that he had done all he could do as a major leaguer, and that it was time to use that background to expand the ministry.

God had more for Johnson to do outside of the rigors of the Major League Baseball schedule, so he would be available for ministry more often.

“That’s why I’ve been able to mentor and coach so many young men here with the Blowfish and that’s why I’m at CIU and mentoring those young men,” Johnson said. “I take that as an honor to be able to do that.”

Johnson told the story of how just weeks after retiring, that he made another trip to Cuba where he visited an extremely poverty-stricken area and drew a large crowd of young men who tried their best to hit one of Johnson’s fastballs. As the session ended, a small boy came to Johnson and handed him two marbles as a gift for coming. At first Johnson was confused, but it was explained to him that the boy was so appreciative of seeing a Major League player come to his town, that he gave him his most valuable possessions.

And that’s why he returns to Cuba where he and local believers share the gospel around the pitcher’s mound. He reports tens of thousands of salvations and discipleship at local training centers.

And that resonated with CIU senior Justice Mazyck who was at the prayer breakfast with a number of CIU Sport Management majors. Mazyck, who plays for the CIU Rams women’s basketball team, said she understands making herself available to God.

“I have a passion. I want to do sports ministry,” Mazyck said. “So for me this was a really great message for what I want to pursue after college.”

Columbia International University consistently ranks among the Top Regional Universities in the South by U.S. News & World Report. Excitement is growing on campus with increased enrollment and new academic programs such as the Doctor of Ministerial Leadership. Request information on enrollment at CIU and Columbia Biblical Seminary or call (800) 777-2227, ext. 5024.