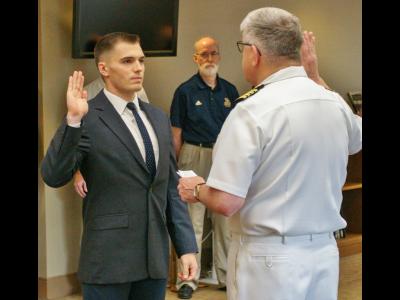 A time-honored military tradition was observed on the Columbia International University campus on June 12. For the first time in memory, a CIU student was publicly commissioned into the military during a brief ceremony in the lobby of the G. Allen Fleece Library.

Columbia Biblical Seminary student Kyle Lambertson is now an ensign in the Navy after taking the oath of office from CIU Chaplain Ministries Professor Dr. Mike Langston, a retired Navy chaplain. Lambertson, who is enrolled in the Master of Divinity in Chaplaincy program, also has the goal of being a Navy chaplain.

A small group of family, friends and CIU faculty and staff were on hand to support Lambertson as he solemnly swore to “support and defend the Constitution of the United States.”

Lambertson has another year of study before receiving his degree, but is now officially in the Navy.

“And the beauty of the program is that while finishing up seminary, I’ll be able to do some basic training and the first phase of Chaplain School and getting ministry experience,” Lambertson explained after the ceremony. “After graduating, once I apply to go ‘active duty’ I’ll have some things out of the way and get on the field faster.”

By his side was his wife Monica, a CIU staff member in the Admissions Department. She sees herself having a role as a chaplain’s wife ministering to Navy families.

“I know there are a lot of ministry opportunities with the wives on military bases and I’m excited about that,” Mrs. Lambertson said. “I know it won’t be easy, but we’re excited to do it together.”

As for Professor Langston, he has participated in numerous commissioning ceremonies, passing on the legacy of the Navy to the next generation.

“It’s important and exciting for me because I get to be a part of the next generation’s ministry,” Langston said. “While my ministry and career comes to a close, I see God’s sovereignty and how He is preparing for the future as He brings in the next crop of chaplains.”

CIU has announced $25 million in expansion plans for the campus, including construction of the $20 million William H. Jones Global Business and IT Center. Information on CIU programs and enrollment is available here or call (800) 777-2227, ext. 5024. CIU is accredited by SACS-COC.