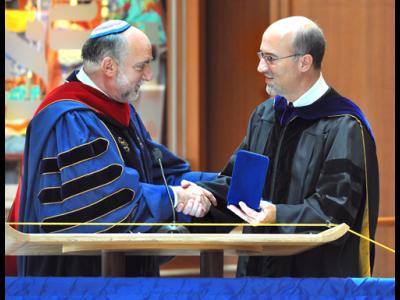 Dr. Bryan Beyer, professor of Old Testament at Columbia International University received the Founder's Medallion from his alma mater, Hebrew Union College-Jewish Institute of Religion (HUC-JIR), in recognition of his 25 years of scholarship in teaching and publishing.

Beyer was awarded the honor by Rabbi David Ellenson, president of HUC-JIR at graduation ceremonies in Cincinnati in June. Founded in 1875, HUC-JIR is the nation's oldest institution of higher Jewish education and the academic, spiritual, and professional leadership development center of Reform Judaism.

"The seven years I served as academic dean were challenging but rewarding," Beyer said. "The undergraduate enrollment grew and many faculty hired during that time are still at CIU making a significant contribution today."

Beyer remained dean of the Undergraduate School until 2001 when he became the dean of students. He held that position for three years, until he became professor of Old Testament at CIU Seminary & School of Missions, his current position.

Beyer has authored or edited a number of publications. "Encountering the Old Testament," the Bible survey he co-authored with Dr. Bill Arnold of Asbury Theological Seminary is now in its second edition and is a leading text book on Christian college campuses. He joined Arnold in co-editing "Readings from the Ancient Near East: Primary Sources for Old Testament Study." Beyer has also authored, "Encountering the Book of Isaiah: An Historical and Theological Survey," and contributed to the translation and study notes of the Holman Christian Standard Bible.

Beyer received his B.A. in Humanities from Colorado State University in 1976, the Master of Divinity with a Biblical Studies emphasis from Denver Seminary in 1980, and the Doctor of Philosophy from HUC-JIR in 1985.

Beyer says his doctoral studies at HUC-JIR were vital to ministry preparation.

"During those five years in Cincinnati, many fine Jewish scholar-teachers guided me, pushed me, and believed in me as I studied at Hebrew Union College," Beyer said. "It also means a lot to me for my alma mater to affirm me in my own tradition as Christian teacher-scholar."