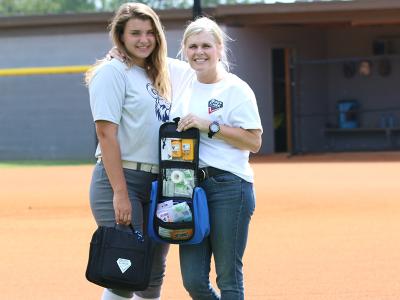 CIU Business major and freshman Reagan Cox and her mom Christy recall the day a couple years ago when a business idea developed between innings as Reagan pitched in a softball tournament in hot and humid South Carolina weather.

As an assistant coach, Christy often had these necessities in the dugout, but as she explained, packing them wasn’t pretty. She says she “felt like a pack rat” because, “I’d have this gross bag that would have Chick-fil-A sandwiches at the bottom of it, and nasty old sunscreen that was out of date.”

Then it dawned on both of them. Why not have an organized kit that offers all the essentials for game day? That’s when a daughter/mom business was born: Body Chek Sports Essentials. From sunscreen to nail clippers to lip balm. From Biofreeze to insect repellant to hand-warmers for late autumn games, it’s all in one neat package.

“It’s such a simple thing, but it just works — putting a few simple things in a bag,” Christy said during an interview with the women in CIU’s Moore Fitness Center. “It’s everything that you actually really need on the field. It’s so smartly packed. And every single day we are out on the field, we use that bag.”

It had been a childhood dream for Reagan to be a businesswoman, and she is combining her love of sports — especially softball — with the new endeavor.

“It’s a product that once you have it, you are so grateful that you have it, and you wonder why you didn’t have it in the first place,” said Reagan who now plays for the CIU Rams softball team.

As they began to lay the groundwork for their business, the women sought wise counsel from one of Reagan’s future CIU Business professors, Amy Dubois.

“She was amazing. She was so good to us,” Christy said. “She literally laid hands on us and prayed for us and gave us some really good direction when we started out.”

For example, Dubois advised them on inventory, to “have faith in the process,” and to “give themselves time to grow.” She also encouraged use of social media for advertising.

Christy says athletes and coaches are also learning about the business at the Body Chek website and through product displays at sports tournaments and conventions, such as a recent South Carolina gathering of the Fellowship of Christian Athletes (FCA).

As in any business partnership, mom and daughter admit that they do occasionally butt heads; however, Reagan said they have “a trusting relationship,” before smiling at mom and asking with a laugh, “What is it like working with your daughter?”

“We disagree more about softball,” Christy responded with a laugh.

Christy explains that she is doing the “heavy lifting” in the business as Reagan works on her education and plays softball, but adds, “I just want her to sit in class and be excited to think she has a business,” and can immediately apply what she is learning to the business.

Meanwhile, the women’s faith has been a part of the business from the beginning.

“We promised we were going to give to something greater than ourselves,” Christy said, noting that Body Chek supports “two needy little girls” overseas through the Christian agency Compassion International and sponsors underprivileged youth teams.

As for long-term dreams, Reagan says she would like Body Chek to branch out into clothing and shoes and be “like Nike.”

“Why not dream big? It doesn’t hurt,” she added.

Mom takes a more pragmatic approach, saying God is teaching them to be patient.

“When God is ready to grow the business, He will — when He thinks we’re ready for it,” Christy added with emphasis.

Combine your passion for athletics with an academic degree at Columbia International University. ClU consistently ranks among the Top Regional Universities in the South by U.S. News & World Report. Excitement is growing on campus with increased enrollment and new academic programs such as the Master of Arts in Global Migration. Request information on enrollment at CIU and Columbia Biblical Seminary or call (800) 777-2227, ext. 5024.