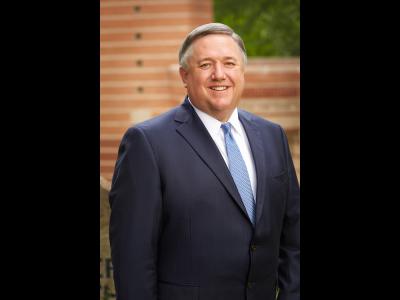 The month of July always has a bit of a different feel on the campus of Columbia International University. There are intensive summer classes, sports camps and a variety of Christian organizations utilize campus facilities for seminars and training.

But this July there is also a quiet, but significant transition taking place. On July 1, Dr. Mark A. Smith became CIU’s seventh president with former president Dr. Bill Jones moving to the office of chancellor. It follows a February decision by the CIU Board of Trustees.

Smith, 51, comes to CIU from Ohio Christian University (OCU) where he served as president for 11 years, increasing enrollment from 400 to approximately 4,600 students during his tenure.

In a wide-ranging interview to be published in the upcoming fall edition of CIU Today magazine, Smith said it is CIU’s nearly 100-year-old reputation for Bible-centered learning and world evangelization that drew him to South Carolina.

“My whole life has been about being involved in ministry and missions,” Smith said. “As I began to explore opportunities that were coming to me, I quickly understood that it was important for me to stay true to what I felt God had called me to do, and that is preparing a new generation of ministers, missionaries and ministering professionals for the day that we live in.”

“I clearly understand that I’ve been hired to grow enrollment and take Christ to the nations through the means of technology,” Smith said. “I think of new ways to take the gospel and to disciple.”

Speaking particularly to alumni, Smith says he “is tremendously honored to follow the great (CIU) heritage.”

“I will give everything to CIU and try to learn and try to understand and try to be faithful to what God has called you and me to do with regard to Christ and the nations.”

Read the full interview in the fall edition of CIU Today magazine available in September online.

The Inauguration of Dr. Mark A. Smith takes place during Homecoming 2017

Check out the Homecoming 2017 events and register here.