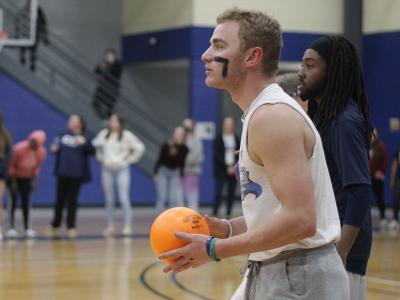 Students compete in the 2021 Shofar Cup

By Alex Brickey and Josh Ford

Students bustled about Hoke Auditorium as they grabbed coffee, tea, and other snacks in preparation for Columbia International University’s first Shofar Cup event, the Coffee House.

Residents of the CIU Houses, Sapientia, Aequitas, Justitia, Virtus, Veritas, Fidelitas and Dignitas, competed for house points by submitting poetry, artwork, and stories to be judged by a panel. The main event consisted of poets reading their work to the admiration of their peers.

Aynsley Vivian, a freshman representing Fidelitas, won the poetry category with “The Better Adam,” illustrating the meaning behind the crucifixion of Christ.

“There were a lot of great speakers for poetry,” said Luke Holder, a Youth Ministry major, “It was deep. It made me tear up a couple of times.”

The next day, students flocked to the Moore Fitness Center gym wearing face paint and CIU House t-shirts. Banners waved from the stands as students cheered and chanted, stomping their feet on the bleachers. It was dodgeball night. The teams consisted of brother and sister houses teaming up against the others. At the end of the night, Justitia and Dignitas came out triumphant over the rest of the Houses.

The third Shofar Cup event was House Feud. This year was the first time the event was played, and a big crowd was drawn into the Shortess Chapel to see what it was about.

The game was styled based on the TV gameshow Family Feud. Each house sent five players on the stage and two houses would try and give the best answers to the questions. Questions such as, “What’s something you should never forget to pack?” and “Name something you find on a person’s arm,” were asked.

Zay Hinton was a part of house Aequitas, a new house this year. He definitely felt the pressure on the stage but was able to have fun.

“When I saw my housemates and how they were laughing I just felt relaxed and was like, ‘we got this,’” he said.

Unfortunately for Hinton, Aequitas lost in a very close round of Fast Money to Veritas.

“Overall, I think we did awesome, and we built great community between us all,” Hinton said.

Veritas went on to be the winner of House Feud.

The final day of Shofar was the cook-off. However, outside the dining hall, more than just cooking was taking place. There were many fun challenges such as races and games spread across the yard.

Inside was where the cooking went down, and the cooks of the houses wanted to leave an impression on the judges who were picked by the Residence Life Team.

Walker won the cook-off with a delicious meal that included:

The Shofar Cup is a part of The House Collective that includes year-round social events, service projects, small groups and house competitions where house members compete to win points to earn the title of House Victors.