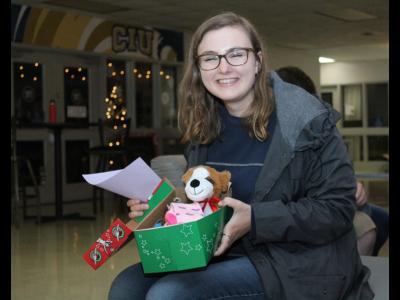 For CIU student Karabo Maretlane, Operation Christmas Child has come full circle. As Maretlane joined about two dozen other CIU students packing shoe boxes of Christmas joy to be distributed around the world by the ministry Samaritan’s Purse, Maretlane revealed that he was once a recipient of a Christmas shoe box in Lesotho, his home country in Africa.

Martlane said packing a shoe box represents growing in his capacity to give and how much God has done in his life.

“I never imagined I could be doing this for someone else,” Maretlane said. “I hope that someone in Africa will find hope in whatever it is they are going through. God is showing me how to serve and to do the same as others did for me.”

As the students stuffed 97 shoe boxes with toys, personal care items and clothing, they wrote notes, and prayed over the boxes that include the gospel message. Among them was another former recipient of a shoe box, Abdoul Balla from Niger.

“I hope my box will go to a Muslim child in Africa and that his heart will be transformed by the gospel,” said Balla. “There is a lot of power in a simple gift like this. When I received a box it made me so joyful. Packing a box is my small way of doing international missions because I am a student in America.”

Meanwhile, American student Abigail Cotton, who served as a CIU intern for Samaritan’s Purse, said her reason for packing a shoe box was “to bring children to the knowledge of Christ Jesus and to grow in discipleship.”

Aja Gaulden added, “I want to express God’s love in a tangible box of items children might need and enjoy. I love the idea of giving like this.”

Earlier in the day, a number of students went shopping for the gifts that were stuffed in the shoe boxes as part of a Prayer Day service project.

“This box is a seed for the gospel and you never know who will receive it or how God will use it,” Balla reminded.