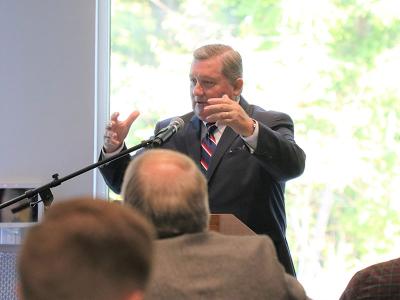 “Pastors have always been an incredible influence in this culture, in this nation.”

That was the message from Tim Throckmorton to local pastors gathered on the Columbia International University campus for “Pastor’s Roundtable: Engaging the Culture.” Throckmorton was among a trio of representatives from the Family Research Council (FRC) headquartered in Washington, D.C., challenging the pastors to consider how they can inform, equip, alert and mobilize their congregations to take a bold stand for biblical values, culturally and politically, within their communities and the nation.

“The world at its worst, needs the church at its best,” said Throckmorton, who serves the FRC as national director of community impact teams. “This is our moment. This is our responsibility.”

Also speaking was Dean Nelson, chairman of the Douglas Leadership Institute which is “committed to serving the black community and the nation by hosting community forums, pastors’ roundtables, policy briefings, and many other outreach events based on biblical values and principles.”

Nelson warned the pastors not to become irrelevant and quoted from Dr. Martin Luther King Jr.’s famous “Letter from the Birmingham Jail” that called for churches to be the conscious of the state.

“There are some White, Black, Hispanic, Asian churches who have no moral authority because they have yielded that prophetic and dedicated commitment to God, and who are satisfied with just being a social club,” Nelson said.

Pastor JC Church, the FRC’s national director for ministry engagement, said the United States has slipped into moral decay because of the apathy of the church. He encouraged the pastors to move from prayer to action, calling on the pastors to run for political office and raise up church members who will do the same.

“Let’s be torchbearers of truth,” Church said. “Let’s occupy until (Jesus) comes. That’s what we’re called to do. That’s the church.”

The messages resonated with Greg Heinisch, the discipleship pastor at Awaken Church in Columbia who said afterward that pastors need to not only pray, but take action “especially in a broken world that is increasingly in turmoil and unrest.”

“As pastors, if we’re not rising to the occasion then we’re missing an opportunity to be obedient to God in a nation that isn’t,” Heinisch said.

Meanwhile, the FRC introduced the new Association of Churches and Ministries “that share a similar vision and mission of impacting our culture with biblical truth.” Information is available at frc.org/acm.