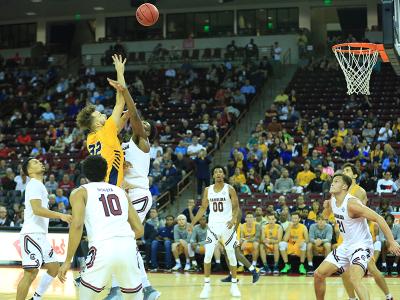 It’s a first. The Columbia International University Rams men’s basketball team traveled across town to Colonial Life Arena to take on the University of South Carolina Gamecocks. Despite only being a few miles from each other, it was the first meeting between the two schools.

And while CIU’s entire athletics program is only seven years old, the Rams held their own against the much larger established school. Read more about the game on the CIU Athletics website. Check out this video by Ben Rutkowski capturing the excitment.

Read about it in this article by Andrew Ramspacher in The State newspaper of Columbia. Also, Men's Basketball Coach Tony Stockman appeared on the Sports Spectrum Podcast to share his Christian testimony and discuss how his faith integrates with coaching.

Columbia International University consistently ranks among the Top Regional Universities in the South by U.S. News & World Report. Excitement is growing on campus with increased enrollment and new academic programs such as the Doctor of Ministerial Leadership. Request information on enrollment at CIU and Columbia Biblical Seminary or call (800) 777-2227, ext. 5024.