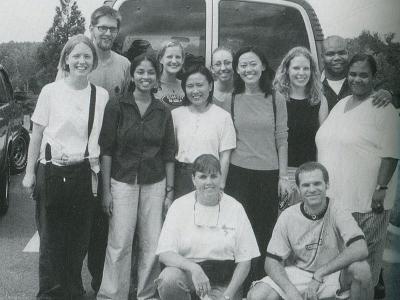 Like many others around the nation on Sept. 11, 2001, Columbia International University President Dr. George Murray found himself away from home, wondering how he would get home, after planes commandeered by terrorists struck New York’s Twin Towers and the Pentagon, with a third plane crashing into the Pennsylvania countryside. Air flights were grounded and Murray was in Pittsburgh. But on campus, CIU was in the capable hands of Provost Dr. Ralph Enlow who called the students to Shortess Chapel to pray for the nation.

But it’s what had already happened on campus before the attack that shows the sovereignty of God and how He would use CIU in a time of national crisis.

That summer, a crisis-response team had already been formed among the student body with the idea of assisting in the aftermath of natural disasters. After the attack, two CIU alumni in New York City wondered if CIU might have students who could go to their city to help with the ministry of outreach and comfort to the traumatized. The team of 12 graduate students was already in place. They represented several nationalities and spoke six languages. But they needed funding. The student body was challenged to pray and give. In one chapel service, CIU students, faculty and staff gave over $10,000, and hundreds signed up for a 24-hour prayer chain for the team while they were in New York.

A day later, the CIU crisis response team drove through the night and plunged into the ministry of caring and sharing in cooperation with the church that invited them. Since the team had more money than they needed to cover their expenses, they used the remainder to help five families in the church who lost fathers in the Twin Tower collapse.

Today, CIU offers a Bachelor of Science degree and a Master of Arts in Disaster Relief and Emergency Management.

Where will a degree from CIU take you? With record enrollments continuing each year, CIU consistently ranks among the Top Regional Universities in the South by U.S. News & World Report, as well as a Best Value Regional University in the South. Request information on enrollment at CIU and Columbia Biblical Seminary or call (800) 777-2227, ext. 5024.