She wears a crown to promote her King 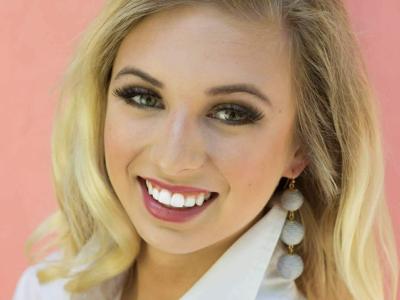 McKenzie and I regularly pass each other on campus and were in the same college algebra class, but we never had a conversation, until I was assigned to write an article on South Carolina’s “Miss Florence.” It turns out Miss Florence is my classmate, McKenzie Jewett.

I knew nothing about scholarship pageants until I had a chat with McKenzie, a Youth Ministry, Family, & Culture major from Rock Hill, South Carolina. Sitting at Grace Coffee Company in CIU’s student center, she shared how she earned her crown, and how through that, she is giving back to the community, and about the competition awaiting her this June at the Miss South Carolina Pageant.

McKenzie has been in three previous preliminary pageants around South Carolina and was first runner-up every single time.  She told me she became discouraged, wondering if pageants were really where God wanted her.

“I knew that God was going to put me where he needed me,” McKenzie said. “I was starting to feel maybe the first-runner up wasn’t a sign to keep going, but a sign to keep back.”

That’s when the Miss Florence organization called her.

So McKenzie picked herself up and dressed herself up; however, as the Miss Florence Pageant progressed, things looked bleak.

“I didn’t win a single preliminary award. They were getting ready to call the winners, and I had already established I hadn’t won, and I wasn't expecting to win at all.”

Then they announced the winner and they called her name.

“And I just started crying.”

Prove the Existence of God

I asked McKenzie how her Youth Ministry major and Christian faith tied into pageant life. She said it has given her an opportunity interact with youth and has played into the public interview portion of the pageants because her paperwork notes that she is a double major in Youth Ministry and Bible at Columbia International University.

“A lot of times my interview was them just really wanting to ask questions about God.”

Last November at the Miss Lexington Pageant, in front of the entire audience, McKenzie was asked, “How would I prove the existence of God to a teenager questioning their faith?”

“It definitely caught me off guard,” McKenzie admitted, saying contestants are normally asked questions about the environment or politics.

Her response was, “That’s a really important question that comes up a lot in youth ministry. Teens, that’s when you question your faith. It happens to everyone ... You see God in everything, you can see Him in the sky, in the creation of trees, plants, in our bodies. Our bodies were created so incredibly. Only an intelligent, loving, caring being could have done this.”

In addition to being a light for Christ on stage, McKenzie practices serving others out of the spotlight.

“So as Miss Florence, I decided that I really wanted to invest in the youth of all of Florence County, so I‘ve been doing school tours."

As Miss Florence, McKenzie’s message to youth is that your beauty is found in “Living Inside Out.”

"Through living inside out, I encourage our youth to use skills that they’re really good at, or things that they really like to do and use those things to be leaders and serve their communities."

She is also involved in a Miss South Carolina Pageant mentorship program, The Palmetto Princess. It’s an opportunity for girls to receive sisterly love, a role model, and the chance to be a part of awesome activities. The fun includes visiting the zoo, going to a pajama party, and participating in pageant rehearsals. McKenzie has three princesses this year.

“They'll go on stage with us during evening gown. My sister is actually one of my princesses this year after begging.”

McKenzie laughed that her little sister was ecstatic about wearing a gown, saying she’d ‘never worn anything this sparkly.’ Recently, McKenzie escorted two of her princesses to McLeod’s Children’s Hospital in Florence to deliver cards of encouragement to suffering patients.

At the Miss South Carolina Pageant in June, new challenges and memories await at Columbia’s Township Auditorium where McKenzie will be a part of history in an updated version of the competition.

“We're actually under the new Miss America 2.0,” McKenzie informed me. “This is the first time with no swimsuit (competition). We’ll be doing evening wear, so it doesn’t even have to be a dress. It can be whatever you want it to be.”

Another “first” is that McKenzie will be the first woman to perform aerial arts on a Miss South Carolina stage, and “this year I’m changing it up and doing Lyra (aerial with hoops) so I’m pretty excited about that.”

Scoring in the competition is changing as well. The talent portion now counts for 40 percent of contestants’ total score. The winner of the Miss South Carolina pageant will earn a $60,000 scholarship. With McKenzie’s long-range goals of obtaining her doctorate and becoming a professor in Youth Ministry, this scholarship would be a welcome contribution.

After my last sip of coffee, I made a note to watch McKenzie compete in June. It’s incredible, what you can learn about a person, over one cup of coffee. I’d gained a deep appreciation for a classmate I’d never taken the time to know. From educational opportunities, serving the community, displaying grace, and proclaiming Christ, I was blown away with how McKenzie witnesses so boldly through pageants. McKenzie Jewett is using her crown to promote her heavenly King.