Jack Horchler is a brave man.

He tried something that few would venture. Stand-up comedy in front of his peers.

Horchler’s routine was performed at the annual AcoustaRockaRappaPaloozaStockFest, better known as Acousta, a formal spring show featuring some of the finest talent on the CIU campus, and some unusual acts. Horchler was only one of two acts that were not musical.

Horchler said he had no idea what to expect after friends encouraged him to audition for the show. As you might expect, he told “inside” jokes that focused on campus life and would be mostly appreciated by fellow students.

“I was concerned about how the audience would react to stand-up comedy,” Horchler said. “I was able to keep the audience laughing throughout without making any jokes that would be considered offensive.”

He says he would even consider doing it again. 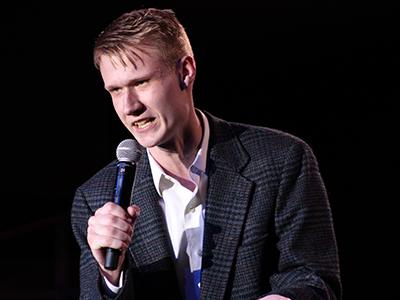