As a prayer circle of 18 CIU women’s soccer players formed in the lobby of the Moore Fitness Center, final items were being stuffed into suitcases and readied for a late July missions trip to Costa Rica.

The athletes were joined by three coaches, a trainer and CIU Athletics Director Darren Ritchie who said the trip will include working at an orphanage, holding soccer clinics, playing soccer against universities, as well as playing against a national team.

Head Coach Kara Farnsworth Lail says the goal of the trip is for these particular players, who have never been on a CIU missions trip as a team, to be transformed as they bring the gospel to Central America.

“We want to share the love of Christ with the people we come in contact with and to be able to use soccer as a way to do that,” Lail said, adding that she also wants “to see them grow together as a team.”

Dr. Dan Coy, associate dean of Spiritual Formation, was on hand to pray that God would “take these people in your time to the right individuals … prepare the way, may many find Christ through the influence of these.” 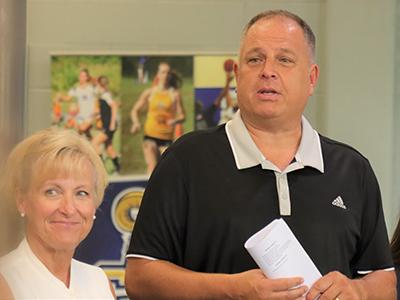