Although it had been nearly three weeks since the new year officially began, Columbia International University students still had the opportunity to celebrate the beginning of 2023 with a “ReBash” party. Because New Year’s Eve falls during the break between semesters, this was an opportunity for the student body to ring in the new year together.

As students entered the Jones Center, some in formal attire and some in rather unique dress, they were greeted by upbeat music, a table filled with hors d’oeuvres and other festive snacks, and the colorful light of glow sticks. There was also a photo booth, line dancing, and a campfire just outside. But this was only the beginning of the fun for the night, as there was an epic balloon release toward the end of the party to celebrate a new year and a new semester.

“There was definitely something for everyone, whether you liked being the life of the party or just hanging out with friends old and new and roasting marshmallows,” said senior Noah Meeker. “It was the perfect mixture of energetic and laid-back.”

Community is at the heart of CIU where we’re celebrating 100 years of educating people from a biblical worldview to impact the nations with the message of Christ. The university consistently ranks among the Top Regional Universities in the South by U.S. News & World Report, as well as a Best Value Regional University in the South. Request information on enrollment by contacting Admissions at (803) 807-5024 or admissions@ciu.edu. 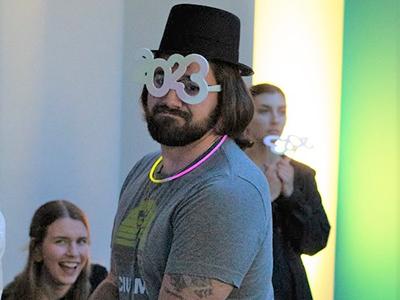 Austin Hilley gets into the spirit causing Aynsley Vivian to break into laughter. (Photos by Macey Drye CIU Student Photographer)