By Dr. Ed Smither, Dean of the College of Intercultural Studies

November conference attracting missiologists from around the world

The theme of Columbia International University’s 100th Anniversary mission conference is the “Future of Global Mission.” How should we be the people of God on mission to make disciples of all peoples for the next 100 years? What are the most pressing questions to address? To press into the future, we must take time to also reflect on the past; the last 100 years of mission sending from CIU. History is an honest endeavor. We seek an accurate view of the past where we evaluate mistakes, failures, and victories, resting in God’s faithfulness. That’s why each of our invited plenary speakers will do some looking back as they challenge us to look forward in mission.

Bob Priest will reflect on the legacy of his parents, Perry and Ann Priest, who studied at Columbia Bible College before going to the jungles of Bolivia to translate the Bible. Bob came from Bolivia in the 1970s to study at CIU where his uncle, Robertson McQuilkin, CIU’s third president, encouraged him to focus on cultural anthropology to better understand cultures in the work of mission. Fully accepting the challenge, Bob went on to earn his Ph.D. in Anthropology (University of California-Berkeley) and focused his career on training others to understand and engage cultures. Bob Priest remains one of the world’s leading cultural anthropologists among evangelical Christians.

Having served in Alaska, Canada, and Siberia, Robin Harris accompanied her husband Bill to CIU in the late 1990s where he was pursuing a master’s degree in Intercultural Studies. After auditing one class in cultural anthropology (taught by Bob Priest), Robin also opted to pursue a master’s degree. Later, she earned her Ph.D. (University of Georgia) in the field of ethnomusicology — the cross-disciplinary study of intercultural studies and music. As an ethnomusicologist or ethnodoxologist, she trains others in the work of contextual or local forms of worship.

Steve Richardson grew up in Indonesia where his parents, Don and Carol Richardson, saw a dramatic response to the gospel among the Sawi people, which was captured in the books “Peace Child,” “Lords of the Earth,” and “Eternity in their Hearts.” After studying at CIU, Steve returned to serve in Indonesia and later was appointed president of Pioneers, one of the largest mission organizations in the world. The focus of Pioneers is to go the ends of the earth, making Jesus known among the least reached.

Though not a CIU graduate, Bekele Shanko will reflect on growing up in Ethiopia. His father, the village witch doctor, was converted after seeing a vision of Jesus. After, he led the entire village to faith in Christ. From those roots, Bekele has led mass evangelistic campaigns across the continent of Africa. As Cru’s vice president of Global Movements, Bekele’s passion is to see people come to Christ and to see transformation occur in every area of their lives.

Our plenary speakers will address some of the most pressing issues in global mission today —understanding cultures, local worship, reaching the unreached, and transformation of the whole person. As they look back on their journeys in mission, they will challenge us to move forward with wisdom and humility. Also, CIU President, Dr. Mark A. Smith, will focus on CIU’s place in the future of global mission, including initiatives in global business and healthcare.

Each of these plenary sessions will be supported by 30 workshops addressing critical issues in 21st century mission. 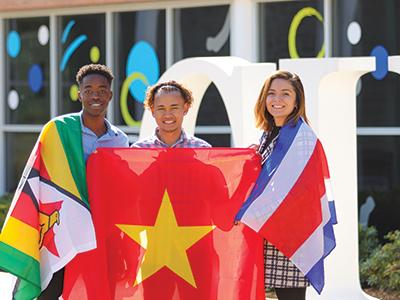