Black, who served in the Persian Gulf War, and is the fifth generation in his family to serve in the Army, said he appreciates it when people thank him for his service to the nation.

“But when you understand the sacrifice and what’s behind it … to say thank you and be appreciated is wonderful,” Black said.

Black also appreciated the words of the Chapel speaker, military veteran and CIU alumnus Dr. Tom Mullikin, who earned his Ph.D. in Organizational Leadership from CIU in 2021.

Mullikin served as Special Assistant to Chief Prosecutor of Military Commissions, overseeing the trial of Khalid Sheik Mohammed and the four 9/11 co-defendants; and as an International Legal Officer and Trial Counsel with the U.S. Army Judge Advocate General Corps. He retired from military service in 2018 as major general / commander of the S.C. State Guard and President of the State Guard Association of the United States.

In his address to the student body Mullikin emphasized the importance of defending religious freedom.

“Religious rights and protections have been hard fought and occupy a special place in the United States Constitution,” Mullikin said.

He added that it is biblical principles that have “inspired, framed and built the United States of America, and served as a foundation for corporate and business principles across this country.”

“It is these principles that these veterans have fought for,” Mullikin added. “Our system of government is well-rooted in Judeo-Christian values.”

Defense of the Constitution’s First Amendment resonated with Black, who these days serves as a pastor at a local church, and added the importance of “what we’re supposed to be doing for God.”

“Because we go from one battlefield to the next. We go from the physical battlefield in the military to a spiritual battlefield for God,” said Black who has just completed a CIU bachelor’s degree in Biblical Studies and is preparing for a Master of Divinity at CIU. “It’s important we know what the Word says and what we’re supposed to be doing for God.”

CIU is celebrating 100 years of its mission to “educate people from a biblical worldview to impact the nations with the message of Christ." The university consistently ranks among the Top Regional Universities in the South by U.S. News & World Report, as well as a Best Value Regional University in the South. Apply now or request information on enrollment by contacting Admissions at (803) 807-5024 or admissions@ciu.edu. 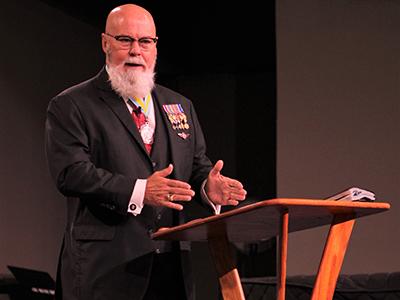