Columbia International University students attending the Faith and Freedom Coalition’s 2022 conference in Nashville heard from a number of prominent government leaders, many of them addressing the conference from a Christian perspective.

Craig Attaway, a senior double majoring in Bible and Philosophy, says he especially enjoyed hearing from Florida Congressman Mike Waltz and former Secretary of State Mike Pompeo because of their “intellectual approach and they gave reasons as to why they thought they are  right.”

“That's what I was wanting,” added Attaway. “I appreciated Waltz's and Pompeo's unapologetic attitude toward the U.S. … proud to be an American and what this great country stands for. That was encouraging to hear from American politicians.”

Kira Rymer, a junior double majoring in Business and Sport Management, said she enjoyed seeing representation from her home state of North Carolina, plus “seeing so many credible speakers and politicians who passionately believe in America gave me hope that our country has a bright future.”

Meanwhile, Robyn Andrews, a CIU senior and Teacher Education major, says she learned a lot about abortion statistics and is concerned that the number of abortions is so high.

The Five-Fold Mission of the Faith and Freedom Conference is: 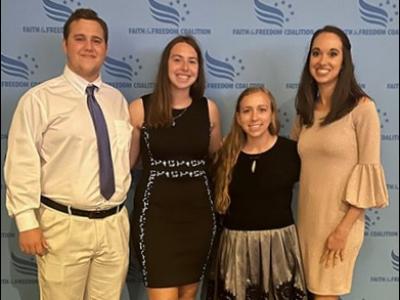