How did Columbia International University alumni Jon and Cindy Hampshire, who serve with Wycliffe Bible Translators, end up as guests on a radio show about caregivers? Well, it helps when you know the host, who also attended CIU.

Jon (Class of ‘85) and Cindy (Class of ’83) were interviewed on “Hope for the Caregiver” hosted by Peter Rosenberger, as they not only discussed their decades of mission work in the Democratic Republic of Congo (formerly Zaire), but also reminisced with Rosenberger on their days together at CIU 40 years ago.

Jon Hampshire recalled a CIU Chapel speaker who challenged students “to be ready to follow God, to obey God, anytime, anywhere in any capacity or anyplace.”

It made a big impact on his future plans.

“Whenever (God) tells me to go, whether today, tomorrow or next year or more — or  to stay here, I'm going to follow,” Mr. Hampshire said. “So even if it's to a country like Zaire back in the ‘90s that was in bad shape … and if you come to that decision and really make that commitment, everything else just sort of falls into place …

“I think really the key is just being open and obedient to God's leading,” Jon Hampshire continued. “Trust and obey is the message that Cindy and I tried to follow for years. It sounds simplistic but it's really very profound. If you trust God and obey Him.”

Rosenberger attended CIU between 1981-1983 before founding Hope for the Caregiver in 2003, a family caregiver outreach of Standing with Hope. Standing with Hope has two program areas: a prosthetic limb ministry envisioned by Peter’s wife Gracie, and a broadcast outreach to caregivers. Peter has been Gracie’s sole caregiver for over 35 years because of disabilities she has suffered, including the amputation of both of her legs below the knee.

Jon and Cindy Hampshire remember their former CIU classmate as an accomplished musician.

“I so enjoyed going there to play. I didn’t know you were listening,” laughed Rosenberger. “Thank you for that memory.”

Listen to the entire discussion on Hope for the Caregiver and the interview titled, ”Translating the Gospel.”

Community is at the heart of CIU and consistently ranks among the Top Regional Universities in the South by U.S. News & World Report, as well as a Best Value Regional University in the South. Apply now or request information on enrollment by contacting Admissions at (803) 807-5024 or admissions@ciu.edu. 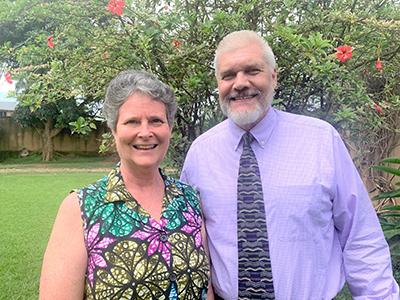