“Don’t knock it until you’ve tried it.”

That’s the motto of a new coffee drink on campus named after the new president and vice president of the Student Government Association (SGA).

Brickey explains that the SGA wanted to create a signature drink for their administration when they learned 34 North was developing a drink that tasted like coffee and lemonade.

“We were immediately fascinated and raced to try it,” Brickey said. “We then asked permission to name the drink ‘The Brickey White’ after Richie White, and myself.”

Brickey explains more about “The Brickey White” in this Q&A:

What are the ingredients of The Brickey White?

The ingredients of our signature drink, the Brickey White, are coffee and lemon syrup.

What has been the reaction to those who have tried it?

The Brickey White has had mixed reactions. People either love it, or they hate it. Typically, people dislike the first sip. However, they do not realize that there is a three-sip minimum. The first sip tastes like coffee. The second sip is a blend of coffee and lemonade. The third sip is where the magic happens. The drink tastes like lemonade by the third sip while also having a slight coffee aftertaste.

What’s your motto? “Don’t knock it until you’ve tried it?”

Our motto is about the bias of people who hear “coffee lemonade” and shrink away. It is a strange drink by nature, however, it is definitely worth the try! When we were planning on creating the drink, we asked people who did not like coffee to try it, and they said that they enjoyed it and were genuinely surprised by it.

Anything else the world should know?

This drink was developed to inform people of who we are as a team. When I say, “we,” I am referencing the team who will oversee student clubs and organizations next year, as well as help to make changes on campus. We are: 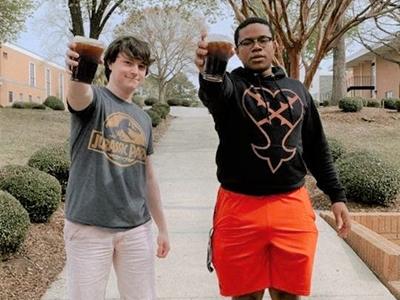