At the 2022-2023 Columbia International University Convocation, CIU President Dr. Mark A. Smith set the tone for the coming school year and the university’s 100th anniversary celebration with an emphasis on the second part of CIU’s motto: “To Know Him, and TO MAKE HIM KNOWN.”

After noting that at the core of CIU is an education grounded in Christ, Smith said that a desire to make Christ known stems from initially worshipping Him just as the apostles did in Matthew 28:17a prior to being given The Great Commission.

Smith proclaimed that “as we worship, God gives us authority to go out into the world,” adding that “for 100 years CIU has been training graduates on fire for the Lord.”

Smith pointed to the example of Joy Ridderhoff, one of CIU’s first three graduates in 1925. After six years of service overseas, sickness and disease caused her to return to the United States. But in her lifetime she proceeded to make Christ known through audio recordings in 4,300 languages.

“What passions and abilities has God given you?” Smith asked the students. “From the war-torn stretches of foreign shores to the oftentimes overlooked local community, God has used Columbia International University for over 100 years to make Himself known, and it is the purpose of this school to help accomplish this mission for the next 100 years to come.”

Hear the entire convocation message, “To Make Him Known,” on CIU’s podcast page. 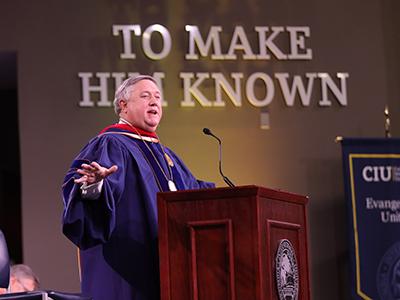