It was a sharp “come-backer” to the mound that got Josh Lindblom thinking about his future beyond professional baseball. The hard-hit ball broke the pitcher’s shin bone.

“There I am rehabbing with a broken tibia, and just thinking, ‘if this were a serious injury, what would I do?’” said Lindblom who has made a living in professional baseball at the Major League and Minor League level, and has also played in Korea.

Today, Lindblom,  who is 35 years old and married with four children, plays for the Nashville Sounds, the AAA Minor League affiliate of the Major League’s Milwaukee Brewers. But he is preparing for life after baseball. He is a student in Columbia International University’s new Doctor of Business Administration (DBA) program. Lindblom says the fully online program is perfect for the unique schedule of professional baseball where a game is played almost every day from March through September and, if your team makes the playoffs, into October.

“I get to the field about two or three (o’clock) in the afternoon, and I get home at 11 at night, so I have all morning to work — read and write and research — it’s very conducive,” said Lindblom, who also earned undergraduate and graduate degrees online. “That’s what I realized very early on in my career — that I’ve got all this time that I’m wasting. I might as well utilize it.”

Lindblom was drafted into the Major Leagues in 2008 while a junior at Purdue University and threw his first Big League pitch with the Los Angeles Dodgers in 2011. He has played for a total of six Major League teams over seven seasons. Along the way he earned his bachelor’s degree from Indiana Wesleyan and master’s degree from Grace School of Theology in Texas, both in Biblical Studies. He hopes to focus his DBA on bringing the Bible and Business together to help other athletes.

A big attraction to CIU’s DBA for Lindblom is the program’s strong emphasis on mentorship, guiding each student through their doctoral project.

“I can trust their advice, and their mentorship and their guidance along the way,” Lindblom said. “It’s people who care about your heart and passions.”

And that’s a good feeling for a pitcher who can sometimes feel alone on the mound with the game on his shoulders. Lindblom describes that first Major League appearance with the Dodgers and the public address announcer booming out his name.

“About four pitches later I had runners and second and third with nobody out,” Lindblom recalls with a chuckle. “I ended up getting out of it, so that was nice, but that’s not the way you draw out your first four pitches in the Big Leagues.”

Fortunately for Lindblom, when he gets in a jam working on his DBA, he’ll get relief.

“Feeling supported along the way is a primary reason that I chose CIU.”

Details on the DBA and CIU’s other accredited online degrees are at ciu.edu/online-degrees. See Dr. Kevin Jones, the dean of CIU Global, discuss the DBA on the "Soda City Live" program on WIS TV with host Dawndy Mercer Plank. Apply now or request information on enrollment by contacting Admissions at (803) 807-5024 or admissions@ciu.edu. 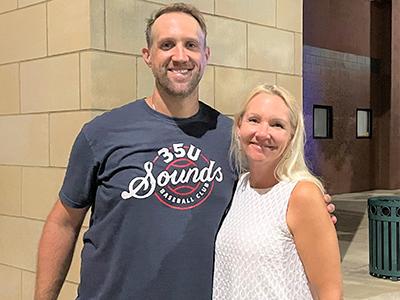