It wasn’t until after her fourth abortion that she “had a gut instinct way down inside that there must be something wrong with killing your offspring,” Parker told the assembly of Columbia International University students.

And so, began the dramatic testimony of the woman who today is determined to help other women who are in similar life situations.

Parker is the founder and president of the Center for Urban Renewal and Education (CURE), a nonprofit public policy institute in Washington, D.C. that fights poverty to restore dignity through faith, freedom and personal responsibility.

When Parker was in her fifth pregnancy, she was determined this time to have the baby — and work the welfare system that she knew well.

“I knew it very well because that’s how I paid for all my abortions,” Parker said, and added, “I was one of those who was so lost I’d stay pregnant as long as I could just so I could get that check on the first and the 15th.”

But her life providentially began a dramatic shift when she applied for a job at an advertising agency hoping to get money “under the table” and stay on welfare. But the owners told her they did not operate that way and that she could not work there because her lifestyle was unacceptable.

“Unacceptable? That’s a hate crime. You can’t use that word in today’s society. Nothing is unacceptable. Unacceptable to who?” Parker argued. When they responded, “God,” Parker’s thought was “I wanted out of there.”

While the ad agency owners didn’t hire her, they were persistent in contacting her and inviting her to church where she heard the gospel of Jesus Christ.

“I heard He died for me … I got up out of my seat and I went down and I received the Lord Jesus Christ, to come into my heart to begin me on a path and journey anew,” Parker said.

She would soon after be challenged by a question from the pastor, “What are you doing on welfare?” There were 4,000 people in church that day, but Parker sensed God speaking directly to her through Philippians 4:19:

And my God will supply all your needs according to His riches in glory in Christ Jesus.

Parker says that when she told her case worker she was going off of welfare, “She cursed me and told me I’d be back.”

She did not go back. Instead she got a job that would lead to a successful career and her own business in sales and marketing, and even later a radio talk show.

Parker used these personal encounters with God to challenge the students to live life boldly in the power of Jesus Christ and not be afraid, telling them “You have a key role.” She especially encouraged them to get involved in pregnancy care centers.

“We’re going to end and make unthinkable the slaughter of the innocent in the womb,” Parker said. “Lives can change by us being faithful to the gospel.”

She also encouraged the students to “be solders that are steadfast, that are living out the Scriptures.”

Quoting from 1 Corinthians 15:58 she added that they should be “immovable, always abounding in the work of the Lord …” 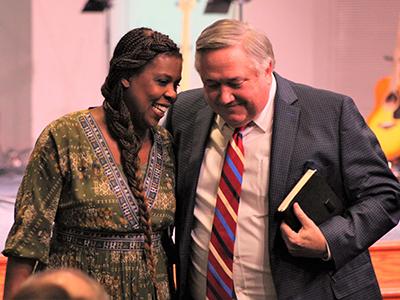