Columbia International University alumnus Dr. Tom Mullikin is being recognized for serving with great distinction in the military.

Mullikin who earned a Ph.D. in Organizational Leadership from CIU in 2021, was presented the Order of Saint Maurice (OSM) by South Carolina Gov. Henry McMaster during ceremonies at the Governor’s Office.

“This is a huge personal honor,” said Mullkin, a former U.S. Army JAG officer who personally trained Army infantry soldiers while serving as an Army master fitness trainer and an Army self-defense (combatives instructor) during the eight years he served in the Army Reserve, 1998-2006. “The Army and the specific infantry branch have always been near-and-dear to me, as it was to my father who served in an ad hoc special operations unit in World War II.”

According to an article in Midlandsbiz, the OSM was created in 1996 and named for Saint Maurice, the legendary commander of the Theban Legion of the Roman Army in the third century. Maurice and his men, who were Christians, were initially decimated (every tenth soldier executed) and ultimately martyred to a man for refusing to worship Rome’s pagan deities. 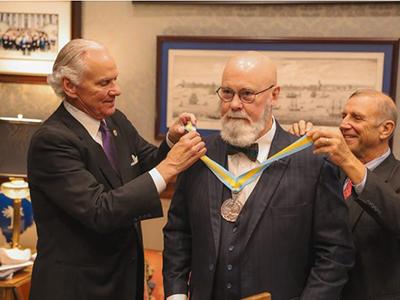