Not many miles from the front lines of the war in Ukraine is Zaporozhye Bible Seminary (ZBS). It was founded by Columbia International University alumna Joanne Mackey (’87 master’s degree in Bible) and her husband Mark in 1994 soon after the dissolution of the Soviet Union and a new beginning for Ukraine as a free nation.

But in February 2022, classes for the 185 ZBS students were dismissed as Russian troops drew closer to the city of Zaporozhye in the southeastern part of the country, about 50 miles from Russian-occupied territory. Now, instead of holding classes on Bible and theology, the ZBS campus is the scene of hands-on ministry — a place of humanitarian aid and refuge for those escaping Russian bombs.

“About half of the staff members stayed in Zaporozhye, and of those who stayed, all are involved with their churches, most are senior leaders or pastors in their churches,” said Joanne on a recently visit by the couple to CIU. “They opened their churches to displaced people, they feed them, they give them a place to sleep, and send them on their way to western Ukraine where it is safer.”

Meanwhile, the ZBS campus is also a place of refuge. Joanne carries a folder of photos to show supporters, including one of the ZBS lunch room packed full of refugees. Another photo is of the a large ZBS classroom where the furniture has been converted into beds.

“They put benches or chairs together facing each other with blankets — this is their sleeping quarters,” Joanne explained.

“We get phone calls very early in the morning and late at night, and we’re helping as we can to get money in — it’s almost impossible,” Mark notes regarding communication from ZBS to the couple who currently reside in Seattle. “We’re doing what we can for them,” Mark adds.

Despite the situation, Joanne smiles when she talks about the deep CIU roots at ZBS, including a shared motto, “To Know Him and to Make Him Known.” In the school’s early years, CIU professors such as Anita Cooper, Terry Powell, Ralph Enlow and Kevin McWilliams were guest teachers.

In 2001, four Ukrainian men completed degrees in the CIU graduate school, and became professors at ZBS. In 2005, a Ukrainian woman completed her CIU master’s degree and has taught at ZBS ever since.

One of the men is Edward Petrov. He wrote a letter that Joanne carries with her as she visits ZBS supporters. He notes how the war has brought ministry opportunities and the preparation that CIU gave him for such a time as this:

In our House of Prayer we received several groups of migrants from Mariupol, Berdyansk, Energodar and Pology. Some of them were believers, and some are not yet. People were very hurt. Their desire was to sleep peacefully, not to the sound of explosions. We talked to them, prayed for them.

In April I took part in patrols in our village together with the territorial guard. This patrol was organized to help the police and prevent looting among the local population. This was a good opportunity to communicate and to pray for people and testify.

I’m so thankful for the opportunity to study at CIU. It was a special time that formed me and my future ministry.

PRAYER IN THE MIDST OF WAR

When Joanne and Mark are asked what they think of Russia, they say they have found solace in the imprecatory Psalms of David, but Joanne quickly adds, “They need Jesus,” and lists specific prayer requests for:

As the couple considers an uncertain future and their next steps in ministry, Joanne’s eyes tear up. She is thankful for 28 years of ministry to Ukraine.

“I didn’t think I had that strong feeling now, but I guess I do,” she said. “It was wonderful to see what God was doing. God was so much at work, especially in those early years of our being in Ukraine, and then over the years seeing the depth of ministry that God produced. 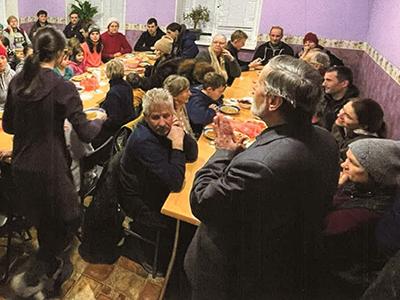 Displaced by war, refugees find a hot meal in the ZBS lunch room before moving on to western Ukraine or Poland. (Photo provided)