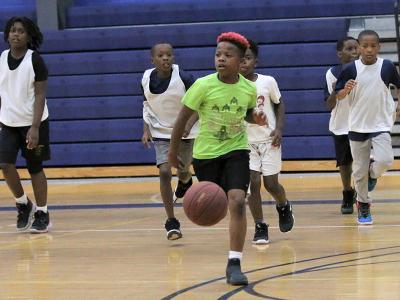 CIU Rams learn to “coach” youth on basketball and life

As Abbott stood on the steps overlooking the CIU basketball court where groups of nearly 200 Columbia-area youth were shooting hoops at CIU’s Hoop for Hope camp, she reminisced on the day she was hired. In 2010 she was tapped to organize CIU’s first-ever intercollegiate athletics program, with the intention that athletics would be a platform for sharing the gospel.

“This is really our ministry — bringing kids to CIU for camp,” Abbott said. “This is a major purpose as to why we started athletics.”

The Hoop for Hope camp is an initiative by the CIU men’s and women’s basketball programs to engage with the youth in Columbia. The name of the camp comes from Jeremiah 29:11 "'For I know the plans I have for you,' declares the Lord, 'Plans to give you HOPE and a future..'" with the purpose of sharing the hope that comes with having a relationship with Jesus.

Buses were dispatched to neighborhoods for four days in July to pick up the 6 to 16 year-old boys and girls and bring them to CIU’s Moore Fitness Center where they were placed into “teams” and “coached” by CIU Rams basketball players who guided them through “stations” that included basketball games, basketball drills, team-building exercises and Bible devotionals.

CIU Rams basketball player Corey Benton, a rising junior with the goal of being a basketball coach one day, said he enjoys being around the youth to teach them about basketball and the Bible.

“I asked God to help me be a leader and teach these kids as much as I can and be as helpful and useful as possible, and give me the strength and courage to do that,” Benton said. “The kids asked me many questions and are learning new things about the Lord and that’s the most important thing in this world.”

Stockman says the experience for his players brings some of them out of their comfort zone.

“I want to challenge them. I tell them that when I recruit them,” Stockman said. “I want to make you a better person. That’s on the court and off the court. Strong in their faith. From when they get here and when they leave. That’s important to me.”

Each day a special speaker challenged the campers to follow the Lord. Among them was Garrett Hayes of Freedom World Ministries who shared how he got involved in the wrong crowd in his youth and was shot six times at a night club. But he said because he had read the Bible daily as a child, the Word of God brought him back to the Lord.

And Abbott says that’s why Hoop for Hope provided each child with their own copy of the New Testament — to carry with them throughout the four-day camp, and beyond.

“We tell them, ‘take your Bible everywhere.’ That’s a philosophy we want them to leave with.”

Want to learn to minister through your sport? Discover more at rams.com including CIU’s first baseball program.