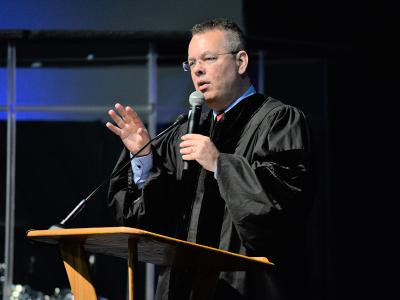 By Bob Holmes and Naomi Balk

Pastor Andrew Brunson, a 1985 graduate of Ben Lippen School, is concerned that the younger generation of American Christians is not ready for a coming persecution — something very familiar to him.

That was the message Brunson had for middle and high school students from his alma mater, as he addressed them in Shortess Chapel on the Columbia International University campus. Ben Lippen, a ministry of CIU, is a Pre-K3 to 12th grade Christian school. He also addressed a CIU Chapel, offering much the same message.

Brunson, a missionary church planter and humanitarian worker for 23 years in Turkey, was held for two years in Turkish prisons after being falsely accused of terrorism in October 2016. Due to a worldwide prayer movement and significant political pressure from the U.S. government, he was finally sentenced to time served and released in October 2018.

Brunson said they will be challenged in speaking the truth especially in the areas of morality and the exclusivity of Jesus and what He demands.

He reiterated that the time for the students to prepare is now, and not when they find themselves in the middle these challenges and have to respond to them.

Near the end of his imprisonment, Brunson thought he would spend the rest of his life in a Turkish prison, never to see his family again. That’s when he realized he had to do something that he challenged the students to do — cultivate a passion for God by accepting God’s will for their lives.

“If your assignment for me is prison, then I want to embrace what you have for me,” Brunson prayed in prison. “I don’t want any of Your plans to fall to the ground.”

And then he urged the students to focus on cultivating that passion and devotion to Jesus, “because it is what will help you stand in the future.”

CIU freshman Kayla Gardener, appreciated the message because “persecution is something the church doesn’t talk about a lot.”

Will Beers, a junior added, “It was a needed exhortation.”

“I’m really humbled to have had him here. I really appreciated the message,” Beers said. “It was just unfiltered and pure. It was not an easy message but was really needed on a lot of levels. It was sobering.”

On behalf of CIU, President Dr. Mark Smith presented Brunson with an Honorary Doctor of Divinity degree, “recognizing an individual’s unique and noble contributions furthering what CIU stands for — impacting the nations with the gospel of Jesus Christ,” Smith announced.

Hear Dr. Andrew Brunson's address to CIU, and his address to Ben Lippen that includes a Q&A, on the CIU Chapel podcast page.

ABC Columbia TV was also at the event. View their coverage.