Baseball and Softball Fields Dedicated to Johnny and Jeanne Miller 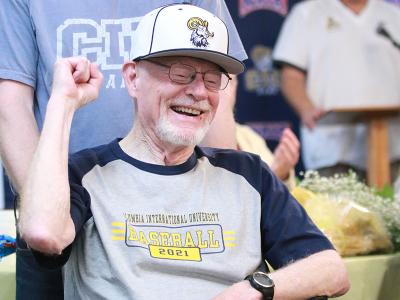 CIU will also soon “Turn on the Lights” for night baseball

"Anybody got a radar gun?"

That’s what Columbia International University Baseball Coach Jonathan Johnson joked as he assumed the catcher’s position and received a strike right down the middle from former CIU President Dr. Johnny Miller in a ceremonial first pitch under some unusual circumstances.

Miller threw the ball from his seat in the CIU Dining Hall as Johnson crouched in an aisle between tables. And the lunch crowd of loved it. At least they were dry.

These were alternative rainy day plans for the official dedication of the CIU baseball and softball fields, now named for Dr. Johnny Miller and his wife Jeanne.

Miller, a former sports reporter and columnist for the Arizona Republic and Phoenix Gazette newspapers, served as CIU’s fourth president from 1991 to 1999. The dedication was also a celebration of CIU’s “Turn on the Lights” campaign to install lights on the fields this summer, with the $500,000 goal being met that day.

“I feel a real sense of joy and privilege to be a part of this,” Miller said.

He also noted how athletics can “open the door of the message of Christ to the community,” and “open the door to students’ lives — students who want to be athletic and have the opportunity to do that in a Christian setting.”

Miller was presented with a personal CIU Rams jersey with his name on the back, a framed jersey, a baseball signed by the players and coaches, and a Rams baseball cap.

A special guest seated next to Miller was baseball great Bobby Richardson who played for the New York Yankees from 1955 through 1966. Richardson, who lives in nearby Sumter, South Carolina, has a close connection to CIU — three of his children are CIU alumni; two are pastors and one served on the mission field.

“I just appreciate this university so much,” said Richardson, who also noted the importance of keeping athletes in close connection with Christ. He was instrumental in starting Baseball Chapel during his days as a player.

“Now every (Major League) baseball team has a Chapel every Sunday, and so do all the minor league teams,” Richardson said.

This is the second season for CIU’s baseball program under Coach Johnson, a former Major Leaguer who pitched for the Houston Astros, San Diego Padres and in the Atlanta Braves system. At the dedication, Johnson described how baseball has led to a ministry for him in Honduras, Nicaragua, and even communist Cuba.

“God has allowed baseball to open big doors in Latin America, to present the gospel and meet with people and bond with them on the sports field,” Johnson said. “These people who would never normally go to church are opening up and listening to me and other athletes … (as we) share the gospel.”