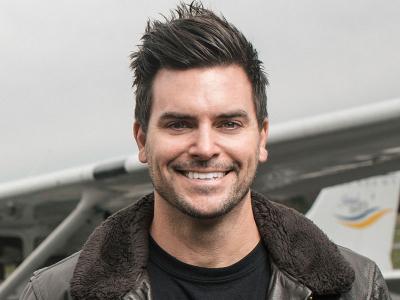 You’ve probably heard of a random act of kindness. But have you ever heard of a Grace Bomb? They may be similar in some ways, but Columbia International University alumnus Pat Linnell says there is a big difference — there is nothing random about the Grace Bomb. It’s intentional and it’s about Christ.

“It’s my contention that the church today should be driving the cultural conversation on kindness,” says Linnell who initiated the Grace Bomb movement and is author of the new book, “Grace Bomb: The Surprising Impact Of Loving Your Neighbors.”

“It’s the kindness of the Lord that leads people to repentance,” said Linnell who earned a Master of Arts from Columbia Biblical Seminary at CIU in 2011. “We define Grace Bomb as an intentional act of love, motivated by Jesus, prompted by the Holy Spirit, to get a neighbor to stop in their tracks and be curious or intrigued about what just happened.”

Practically speaking, a Grace Bomb can be offering an extra tip to a hardworking server, giving up a seat on an airplane, or making a meal for the ER nurse next door. The recipient of the Grace Bomb can then be given a card that says, “You’ve been Grace Bombed,” with a link to the Grace Bomb website where they find a message that reads, “A Grace Bomb is an intentional act of love motivated by Jesus. We hope you have been encouraged by receiving a small taste of grace.”

Linnell recalls the time that his waitress was stiffed when her last patrons left without pay their bill. Linnell “grace bombed” by paying the bill. The act caught the attention of the restaurant owner’s wife who a year later showed up at Linnell’s church and was baptized. She pointed back to the grace bomb as having revived her interest in Christ.

“I think this is a tool for the church for us to grow in our relationship and obedience to Christ, and then watch and see the cool things He might do in our community,” Linnell said.

Linnell credits his CIU education for taking the deep truths of the Bible and making them practical for people in the pews.

“I loved the robustness and the richness of the education, but I also encountered people who could translate these deep spiritual and significant truths in a way that my seven-year-old would understand,” Linnell said.

And that has led him to encourage even the newest of believers to share their faith with their neighbors, pointing to Bible passages such as the Apostle Paul’s letter to the Ephesians, especially chapter 2, verse 10.

“We are grace-built people because we’re saved by grace through faith — so we understand our identity in Christ,” Linnell explains. “But then clearly Paul says we are created in Christ Jesus for good works — that’s when we have to tie in this idea that we’re grace-built people meant to grace bomb people.”

There are over 19,000 CIU alumni serving in 150 nations. With record enrollment in 2020, CIU consistently ranks among the Top Regional Universities in the South by U.S. News & World Report, as well as a Best Value Regional University in the South. Request information on enrollment at CIU and Columbia Biblical Seminary at (800) 777-2227, ext. 5024 or www.ciu.edu.