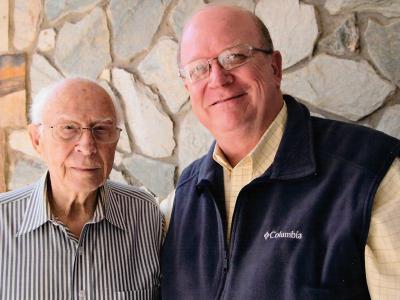 As communism fell in Eastern Europe in the early 1990s, CIU alumnus Jesse Powers sensed God leading him to take the gospel to Romania. He would make nearly 60 trips to the former Soviet Bloc country, taking with him scores of pastors and lay leaders to meet the needs of believers and preach the gospel to the unsaved.

Powers graduated from CIU in 1957 when it was known as Columbia Bible College. Today, at age 91, he no longer makes the trips to Romania, but he is still in the pulpit of First Baptist Church of Johns Island, South Carolina, where he has been serving as “interim pastor” for the past eight years.

Learn more about the life and ministry of Jesse Powers in the article “Jesse Powers: A Heart for Romania” by Tim Clark, published in The Baptist Courier.

Serve the Lord and His church with a degree from CIU. Check out the many ministry and marketplace academic programs available. CIU consistently ranks among the Top Regional Universities in the South by U.S. News & World Report. Excitement is growing on campus with increased enrollment and new academic programs such as the Bachelor of Science in Disaster Relief and Emergency Management. Request information on enrollment at CIU and Columbia Biblical Seminary or call (800) 777-2227, ext. 5024.