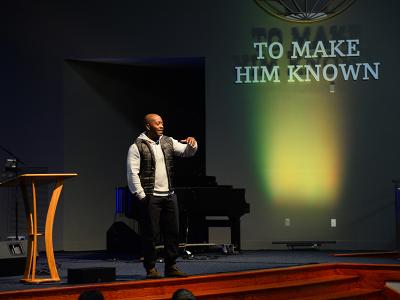 Students screamed cheers of ecstatic encouragement from the bleachers as Professor Dr. Mike Naylor and his volleyball team faced off against the team led by Dean of Students Rick Swift while CIU athletes facilitated the match and offered commentary.

You might ask, “Have some roles been reversed?” In the Moore Fitness Center, one of the most popular games of the year was underway: The Faculty and Staff Volleyball Game. No student wants to miss the chance to watch his or her favorite professors battle against each other. Though it’s certainly a wildly hilarious event, it’s also unifying.

It was a day to remind students to seek joy, seek help, and seek the Lord. It was a prayer day at CIU organized by the Athletics Department.

After the epic volleyball game, CIU Professor Emeritus Dr. Terry Powell shared from his heart about his struggles with the darkness of depression, offering authenticity and light to others with similar struggles. He also encouraged students to visit his blog “Penetrating the Darkness.”

Following the time in the Moore Fitness center, students transitioned to worship in Shortess Chapel with the CIU chapel team and testimonies with CIU Men’s Assistant Soccer Coach Asher Quave-Robinson and T Rousey of the Fellowship of Christian Athletes. The day also included a prayer walk to the athletics facilities around campus.

“Prayer day today was awesome because we got to have both an engaging and energetic time with the faculty and staff volleyball game while also being able to hit on serious topics,” said Student Body President Andrew McNeill, a senior. “T Rousey said, ‘We often get told people’s Scriptures and not their scars,’ and it was really encouraging to hear the ways God is working in the CIU community.”