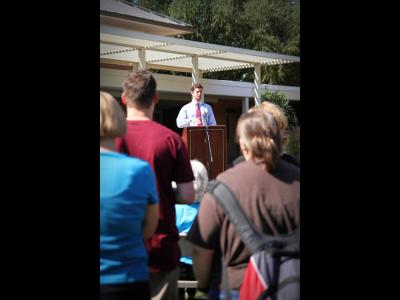 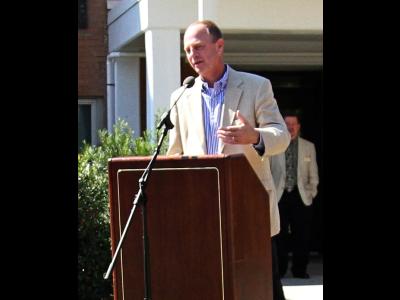 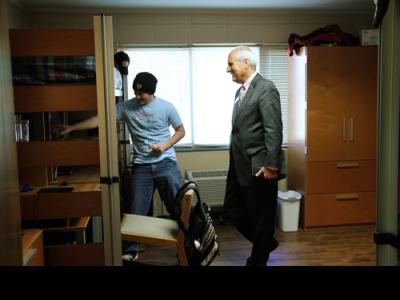 The Columbia International University campus map calls the men’s housing unit that was renovated over the summer, West Residence Hall.  Matt Densky, an RA who lives in West calls it “a tool shed.”

Densky represented the residents of West as a featured speaker at the Oct. 6 dedication of West, attended by the CIU Board of Trustees.  Densky, an alumnus of the CIU undergraduate program, and a current student in the CIU seminary, thanked Tobin Cassels of Southeastern Freight Lines for his family’s financial gift that made the renovation possible.

Densky then compared CIU students to tools being sharpened for Kingdom work, and their renovated living quarters, a “tool shed.”

“This gift has provided a nicer tool shed for us to be stored in,” Densky said to a chuckling crowd of students, faculty and staff gathered outside West on a beautiful autumn day.

Cassels, who is a member of the CIU Board and president of Southeastern Freight Lines, expressed thankfulness at his ability to participate in God’s plan for CIU and said he hopes to be involved in the ministry of the “beautiful feet” that reside in West.

“How beautiful are the feet of those that bring good news,” Cassels read from Romans 10:15.  “CIU equips beautiful feet,” he added.

CIU President Bill Jones also noted that a financial contribution from the Cassels family made exterior improvements to three other residence halls possible over the summer.

“CIU needs to stay competitive as a university,” Densky said. “By renovating the dorms, we are competing with other campuses and bringing in more students.”