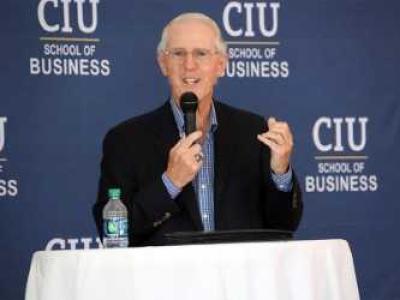 Anne Marie Green was so excited about what she was hearing at the Columbia International University Leadership Luncheon that she tweeted it out right away: “Culture is the platform for strategy and vision.”

Green, a member of a local school board, joined nearly 80 other business and community leaders in downtown Columbia for lunch, and to hear former Krispy Kreme CEO James Morgan discuss how creating a culture of humility in the workplace leads to success.

Morgan, 71, drew from his 40 years of business experience in discussing the attributes, qualities and characteristics of a good leader, as well as the lessons he learned from his time at Krispy Kreme. And of course, there were doughnuts for dessert.

Morgan became Krispy Kreme CEO at a time when the business was struggling financially and turned it around by changing the culture.

He began to institute major changes when he realized that because the business is open seven days a week, many of the employees were overworked. So, he gave the employees four extra days off during the summer for extended weekends to take part in faith, family or community events. He also opened up the conference rooms for Bible studies and other religious devotions.

“Walking through those halls with the people who heard the same devotion you did really made a difference,” Morgan said.

To emphasize the importance of the right kind of culture in the workplace, he told the story of how Krispy Kreme had a “Pirate Day” promotion offering a free doughnut to customers who talked like a pirate and a dozen doughnuts to customers who dressed like one. Morgan expected to lose a lot of money on the promotion — and they did. But he realized the value of it all when a mom sent him a letter describing the joy of her son who suffered from Leukemia. The boy dressed like a pirate that day and the store manager made a big deal of it.

“(Before that) she was not sure she would see her son smile again,” Morgan said.

He added that the event highlights the Krispy Kreme mission which is about more than making money:

“Our mission is to touch and enhance lives through the joy that is Krispy Kreme.”

Morgan also said he has never seen as much division in the American culture as there is today. He encouraged the audience to instead, “make someone’s day better. It will work.”

Anne Marie Green, the school board member, liked that.

“He always leads with kindness and that’s so rare right now,” Green said.

Also listening to Morgan was Michael Crapps, the president and CEO of First Community Bank in Lexington, South Carolina. He said the message resonated with him, as he strives for the same type of leadership in his business.

“We have five beliefs that make up our culture — the fifth is excellence with humility,” Crapps said. “We always strive to deliver that whether it’s a service, a product or to each other in an excellent manner. But always with the idea that we can be better and to do it with a sense of humility.”