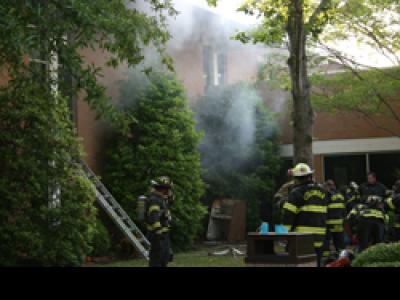 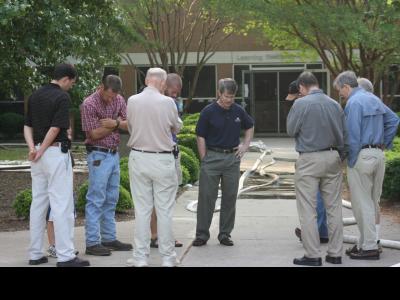 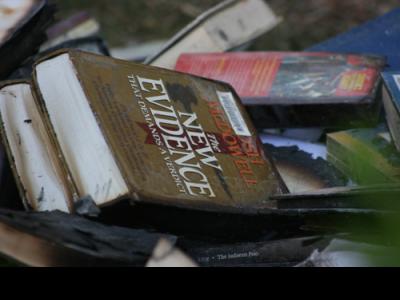 The G. Allen Fleece Library at Columbia International University was heavily damaged by an intense early morning fire May 8. The Columbia Fire Department was called to the scene about 6 a.m. after a student noticed smoke coming from the building and alerted a security guard who called 911. The library was closed at the time and there were no injuries, but there was heavy fire damage to both floors at the rear of the two-story library, and heavy smoke damage throughout the library.

The cause of the was an electrical problem in a fluorescent ceiling light. Damage is estimated at $1.5 million.

The library is part of the larger Ridderhof Building that also houses Hoke Auditorium, classrooms, offices, a computer lab and WMHK Radio. While the fire did not go beyond the library, smoke could initially be smelled throughout the building. A fire restoration company has eliminated most of the odor, and a library restoration company is salvaging what books and equipment it can.

The fire comes as students are preparing for final exams just ahead of commencement on May 15. But the library will be unusable for a while as the CIU administration looks for a temporary home for the library.

CIU President Bill Jones came to the campus as soon as he could to view the damage, and to lead fellow CIU administrators and staff who were on the scene, in a prayer for strength and encouragement. He also personally thanked Columbia Fire Chief Aubrey Jenkins and his firefighters.

CIU Library Director Jo Ann Rhodes, who has been at the library since 1988, watched as firefighters traversed ladders, and entered the library through broken windows to extinguish smoldering books inside.

Since the fire, Rhodes says she has been heartened by an outpouring of support from fellow librarians around South Carolina who say their libraries are open to CIU students to visit, if needed.

Rhodes says among the major losses are rare Bibles that were translated into the languages of remote people groups by CIU alumni.

The fire drew a great deal of local media coverage:

Monetary gifts for the restoration of the library are being accepted. They should be designated for "Library Restoration."

The last major fire on the CIU campus was in 1975 when an aging music building was totally destroyed.