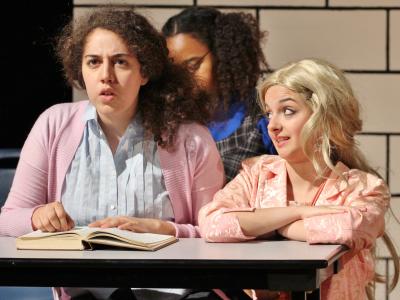 The colorful stage lights, powdery makeup, sparkling costumes, and energetic songs flash before me. “I don’t know Sarah,” I confessed, “I just have too many other things to do. I’m working several jobs, I’m taking 17 credit hours ... I just don’t think it would be wise.”

Sarah Causey (junior) listened. She asked me to pray about auditioning. As a sister in Christ, I could see that she was more concerned with me as a person than a cast member. She told me to pray about auditioning. I decided to take a chance and showed up for an audition for the upcoming production of High School Musical. I got a callback and was ecstatic about playing Sharpay Evans.

The plot of the story is one many of my generation have loved since childhood. East High School is starting off the semester with a championship game coming up, a science decathlon, and a spring musical. Sharpay Evans is the school’s resident diva and the blonde antagonist in the musical. She’s wrecked when the new girl at school gets a callback for the main part. Gabriella Montez, played by Camilla Cruz (freshman and Communications major), comes with a voice so beautiful, it threatens to take the lead from Sharpay in the school’s production. Gabriella Montez is known as the intelligent nerd-girl, but that doesn’t stop her and basketball star Troy Bolton, played by Eli Witt (freshman and Youth Ministry major), from working together. Soon, the whole school is in an uproar. Will the basketball team lose their game because their lead player is distracted? Will the science club come in second place because their top competitor is focusing on callbacks? However, as the story progresses, the kids realize that there are more important things in life than fitting in at school and meeting the expectations of others. Troy and Gabriella land the lead roles in the muscle and Sharpay is put in her place.

Once the show was cast, we dove into rehearsals each week with character development, choreography, acting critique, and singing lessons. Overall, I've been thrilled with how stress relieving this experience has been to me. One of my goals in taking the role was to be as unlike Sharpay as I could when I was backstage. I was tempted, after the first read though to make her character bubbly, funny, and bright. I felt convicted instead, to really focus on her poor qualities. Sharpay is a sharp contrast to the gentle beauty of Gabriella and the caring personality of Troy.

Being involved in theater at CIU has opened the door for me to meet people in different classes and majors. Some of my dearest friends in college became my friends because we performed in shows together. Jonathan Acosta (freshman and business major), who plays Ryan Evans has become one of my best friends! Bailey Warren (junior and English major), playing Taylor McKessie has brought so much joy. I even got my younger brother, Elijah Kost (freshman and Digital Media and Cinema major) to audition. Rehearsals have given us all the chance to make so many memories together.

Throughout the show, It surprised me how consistently Sarah has challenged us to put this show in the Lord’s hands. I was skeptical. I didn’t see how this musical could have biblical significance. CIU’s theme for the semester of “Unity” aligns perfectly with the message of this show though one of the most colorful scenes in the musical is “Stick to the Status Quo.” Sarah stressed the importance of breaking the molds society gives us in real life. She challenged, “Is your obsession with meeting the world's standards keeping you from striving to glorify God? After all, if you are so focused on what the world expects you to be, then you can't focus on what God wants you to be. He already loves you, now He's working to make you better. That's what we should be striving for.”

The productions at CIU are almost entirely student led and the cast works tirelessly to bring vibrant productions to the stage that glorify God. Shows are Friday April 12 at 7 p.m., Saturday at 7 p.m. and Sunday at 3 p.m. in Hoke Auditorium. Tickets are $5 for adults, $3 for students and $1 for kids under 12.