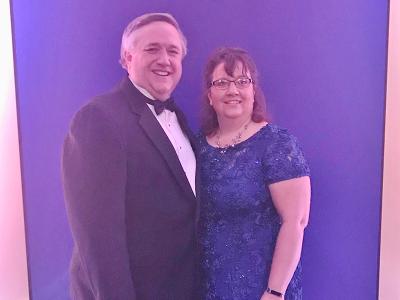 CIU President Dr. Mark Smith and First Lady Debbie Smith were guests at the Inaugural Ball, under the bright lights of the Columbia Metropolitan Convention Center.

As a band played stirring patriot music at the inauguration of South Carolina Gov. Henry McMaster, an announcer called out the name of individuals or groups invited to the event, including the presidents of South Carolina institutions of higher education.

Among those presidents descending the Statehouse steps at the announcement of the education leaders was Columbia International University President Dr. Mark Smith. Alongside him was a new friend, Dr. James P. Clements, president of Clemson University in South Carolina’s Upstate. Smith says they “connected” because Clements is a former president of West Virginia University from where Smith earned his doctorate.

Smith says the two plan to get together soon to “talk about opportunities and how we could work together.” And of course, he congratulated Clements on the Clemson Tigers national football championship.

Meanwhile, Gov. McMaster had the attention of the college presidents as he called for “bold” education reform in his inaugural address.

Columbia International University is ranked #1 among colleges and universities in South Carolina by BestColleges.com. Excitement is growing on campus with the new $20 million William H. Jones Global Business & IT Center and CIU’s first baseball program.  Information on enrollment is available here or call (800) 777-2227, ext. 5024.