CIU President honored with Patriot Award from Guard and Reserve 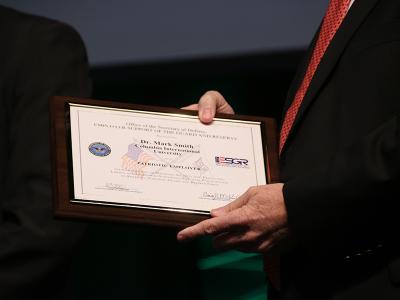 Columbia International University President Dr. Mark Smith has been recognized for his support of U.S. military Guard and Reserve members.

At a CIU Chapel service on Dec. 3, Smith was surprised by representatives of ESGR, “Employer Support of the Guard and Reserve” who presented him with the Patriot Award. The Patriot Award reflects the efforts made to support Guard and Reserve members through a wide range of measures including flexible schedules, time off prior to and after deployment, caring for families, and granting leaves of absence if needed.

Smith was nominated by CIU Adjunct Chaplaincy Professor Dr. Brian Bohlman who is an Air Force chaplain. Bohlman, who was on hand for the presentation, returned to Columbia over the summer from a six-month tour and is scheduled to leave again in early February.

“They understand the balance between my military commitment, working for CIU as an adjunct, and balancing family,” Bohlman said after the presentation. “I never have to worry about my job. I thank CIU and the culture that Dr. Smith has brought.”