CIU soaring to new heights with “Topping off Ceremony” 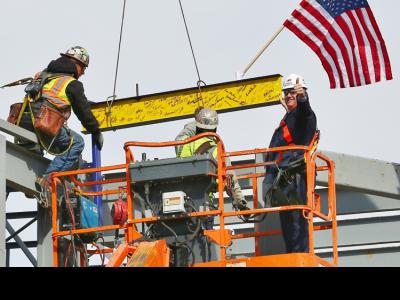 Construction of new Global Business and IT Center progressing

By Naomi Balk and Bob Holmes

Columbia International University and Mashburn Construction celebrated a time-honored building tradition with a “Topping off Ceremony” of the $20 million William H. Jones Global Business & IT Center under construction at the CIU entrance on Monticello Road.

Officials of both companies, as well as the construction workers, cradled large Sharpies in their hands as each signed their name to a ceremonial metal beam that will “top off” the Business & IT Center. The Center is being designed to be a training ground for best business practices at home and abroad, for business as mission, and a hub for Monticello Road community business development.

CIU President Dr. Mark Smith called it a “special day” for CIU and a “huge step forward” for the school as it looks to the future.

“CIU has dreams about expanding in new areas with our core mission,” said Smith at the November event. “Our motto is ‘to know Christ and to make Him known,’ and that is one of the things that will come out of this building. This is a new strategy as we look forward to making Christ known around the world.”

Smith also said the Center will become a key place for students to learn good business strategies, and “go into countries to start small businesses,” and for “IT to be a critical component as they go work around the world.”

Smith then offered up a prayer that ministry will go forward and multiply because of the Center and the students who will study there. “Men and women who will take Christ around the world,” Smith began. “And we ask that you would multiply all the efforts that are involved here.”

The building is named for CIU Chancellor and former CIU president Dr. Bill Jones who looks forward to business graduates who will tell people about Jesus “in offices and break rooms so people can hear and understand the gospel.”

All watched as President Smith rode a construction lift to secure the ceremonial beam in place.

“I used to weld,” Smith laughed as he remembered how that was not his forte. Attached to the beam is a small tree and a United States flag, also traditions.

It was announced that construction of the building is running a little ahead of schedule, with completion expected in August in time for the new school year.

Interested in Business? Check out our Business program options here. Excitement is building on the CIU campus with a dramatic increase in enrollment. Information on enrollment is available here or call (800) 777-2227, ext. 5024.