The Class of 2021 Celebrates 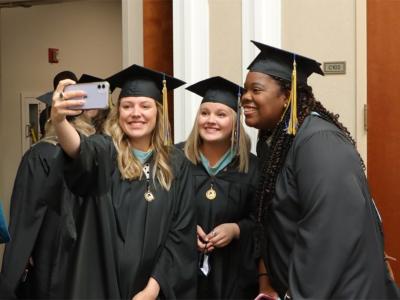 Six-year-old Sarah Pilpe let it be known that “My mom is a good teacher.”

And for good reason.

Her mom, Jennifer Pilpe had just walked across the stage to receive her Ph.D. in Educational Leadership from Columbia International University in the May commencement ceremonies held at Shandon Baptist Church in Columbia.

Mrs. Pilpe, who is an administrator at Ben Lippen School, says it’s been quite a journey, crediting a lot of people who encouraged her through the program, but especially God.

“God opened this door and in obedience I walked through it,” Pilpe said at a reception after commencement. “He never leads us where He is not going to sustain us. It’s to His glory.”

Standing nearby head and shoulders above most of the celebrants, and clutching his bachelor’s degree in Communication was Jeff Mcllwain, who played an important role in CIU’s young basketball program.

“Being the first All-American and first Player of the Year, that means a lot to me,” Mcllwain said. “I do carry that with pride. I give CIU a lot of credit for where I am today.”

Meanwhile, across the reception area, a student had just given a hug of thanks to Professor Dr. Mark McCann who says CIU students “are like our sons and daughters.”

“In some cases we’ve been through some of the more difficult times with them, as well as the happy times,” McCann added.

Former Wisconsin Gov. Scott Walker delivered the commencement address to the 375 members of the class of 2021. Walker, who is today the president of Young America’s Foundation, challenged the graduates with a message of “Don’t Be Afraid.”

“We’re counting on you,” Walker said. “We need leaders like you to stand up for our values —leaders who can stand up and defend our faith and our freedoms.”

See a video of the commencement exercises at the CIU Facebook page.