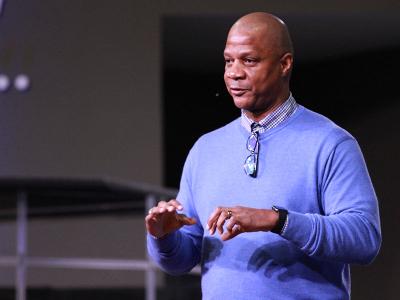 One of Major League Baseball’s legendary power hitters says “baseball is just a game. It will pass. But one thing I do know, God’s Word is going to be here forever.”

Darryl Strawberry, who played with four Major League teams over 17 years in the 1980s and ‘90s, shared his Christian testimony in Columbia International University’s Shortess Chapel as part of a John Maxwell Leadership Forum.

Referring to himself as a former womanizer with drug and alcohol addictions, who also did jail time and faced bankruptcy, says God has transformed him to bring a message for God’s glory as an evangelist.

“If I had not gone through struggles, I probably would have made another $70 million playing baseball and I would have never met Jesus,” Strawberry told local reporters after the event.

But he says his mother and wife at different times in his life prayed that “God would knock him off his own throne,” adding that people need to come to the truth about God despite distractions from Satan.

“They’re lost. That’s what the enemy wants,” Strawberry said. “He doesn’t want people to come to know the truth, come to know God because if they do, their life can be changed just like my life was changed.”

“When God changed me and called me into the ministry, I got serious about it,” Strawberry told the reporters. “You can’t straddle the fence with God. You’ve got to make a commitment. You’ve got to surrender yourself. God was very persistent and I surrendered myself to His will and I’m glad I did.”