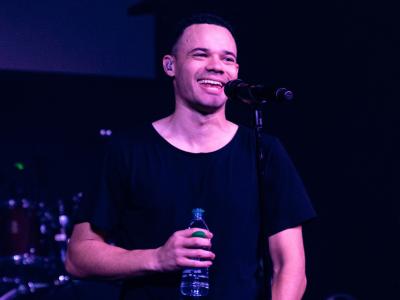 Grammy nominated artist and Dove Award Winner, Tauren Wells brought together the energy of showmanship and the passion of Christianity in a concert at Columbia International University.

Over 630 people poured into CIU’s Shortess Chapel, including over 100 high school students attending the CIU McQuilkin event over the weekend, introducing the students to CIU.

Local radio station Millennial FM pumped the crowd for the evening, introducing the artist, and leading social media scavenger hunts. Current CIU students were invited to talk on the spot about their school. Jessica Morgan, a senior, shared her CIU experience saying, “If he (God) wants to use you through CIU don’t say no because he’s going to do crazy things.” Joy Jones, a sophomore added: “I think that’s the highlight of this school — is that they really, really care about you,” she told the crowd.

Opening the concert was the band Common Ground founded and led by current CIU students and CIU alumni. The mission of the band is “To see lives transformed by encountering Christ, equipping individuals, and expanding the kingdom.” Common Ground was thrilled at the opportunity to lead others in worship while gaining experience as musicians.

Following Common Ground was performer Joshua Micah who shared how his singing career is not something he created to chase his own glory. Rather, he wants to celebrate life in Christ by bringing his Creator glory through music and by impacting others.

Finally, the anticipated performer of the night arrived on stage, and Tauren Wells still has the campus and Columbia talking. The audience was not alone in having a night to remember. Wells stated on his social media after the concert, that he had had an “amazing night” at the sold-out concert, thanking all who attended. He said he’ll definitely be back.