Earth Day: Worshipping the God of all creation at new amphitheater 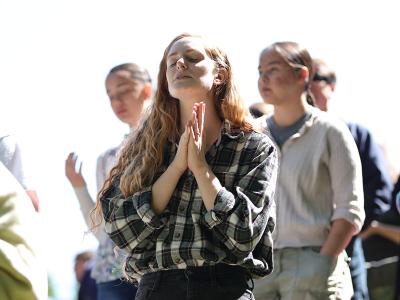 Earth Day was a perfect day to have the first “Cathedral of Trees” Chapel. That’s what Associate Dean for Spiritual Formation Dan Coy likes to call the new amphitheater built in a wooded valley near the pond behind the Prayer Towers — strategically situated for worshippers to sit on the grassy hillside above the stage.

As the worship band led in familiar songs, dragon flies danced among the student body who soaked in the sun on a cloudless, cool, 56-degree morning.

God’s creation was not lost on a band member who prayed, “You are our maker — the Creator of what is all around us.” That was followed with songs “How Great is our God,” and “How Great Thou Art.”

Coy says the amphitheater is just one of the improvements on the acreage behind CIU’s landmark Prayer Towers. Also new are what he calls “coves” or “circles.”

“Circles where we have put benches … one is a study area or you can eat there,” Coy explains. “Then there is one that has a fire pit that can seat 60. Then there are some other places we’re developing further with more coves.”

Coy says the purpose for the improvements is simply more ways students can draw closer to God in prayer, harkening back to CIU’s roots and the circle of “Praying Ladies” who asked God to bring a Bible school to Columbia nearly 100 years ago.

“As we come to the heart of our campus, we’re refreshed in Him and spending time in prayer at the Towers, remembering who He is, and how we started,” Coy said.

The Prayer Towers were built to resemble the towers of the Colonia Hotel in downtown Columbia, one of CIU’s first locations after its founding in 1923.