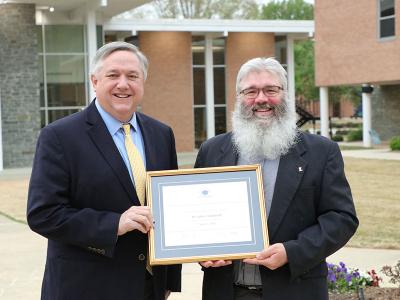 Longtime Columbia International University Bible Professor Dr. John Crutchfield is being honored for his teaching with the 2021 Excellence In Teaching Award from SCICU (South Carolina Independent Colleges and Universities).

A faculty member from each of SCICU’s 20 member colleges and universities is nominated for the award according to rigorous guidelines.

Crutchfield is a 20-year member of the CIU faculty and is a CIU alumnus. He earned an M.A. in Hebrew Old Testament and a B.A. in Bible and Humanities from CIU. He holds a Ph.D. from Hebrew Union College-Jewish Institute of Religion (Ohio). His dissertation titled “Circles of Context: An Interpretation of Psalms 107-118,” was published by Paternoster Press in 2000.

In addition to his CIU teaching responsibilities, Crutchfield’s publishing experience includes serving on a committee of the Anglican Church of North America (ACNA), which produced the “New Coverdale Psalter,” a revision of the traditional “Coverdale Psalter,” for inclusion in ACNA’s 2019 “Book of Common Prayer.”

Each year the 20 award recipients receive a framed award certificate and a $3,000 professional development grant.