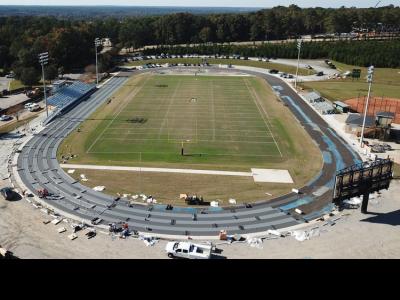 With months of ground preparation behind them, crews are rolling the Mondo surface on the track around the Ben Lippen School football field. It’s the final touch for the $1 million Olympic-style track to be used by the Ben Lippen Falcons and the Columbia International University Rams track and field teams.

The eight-lane multicolored Mondotrack is a leading innovation in track and field surfacing. The new surface will make Ben Lippen the only SCISA school with a Mondotrack, and CIU among the few South Carolina colleges with one.

Mondotrack supplies track surfaces for the Olympics and is known worldwide for enhanced performance and decreasing the chance of injury. Mondotracks are also unique for their durability.

New bleachers and a new press box were also recently installed at the site.

Meanwhile, the Ram-Falcon 5 K Challenge, a fun fundraising event, is planned for Nov. 17 on the CIU/Ben Lippen campus. Proceeds will help in the purchase of track and field equipment such as pole vault and high jump mats, hurdles and starting blocks.

More information on the Ram-Falcon 5K Challenge and registration is at RunHard.org.

Want to play for the CIU Rams? Find your sport at rams.com.