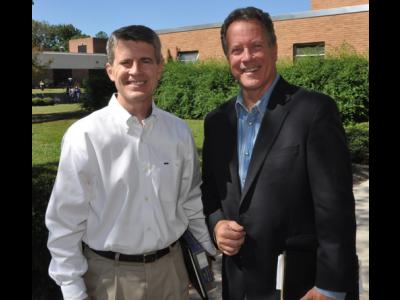 The newest member of the Columbia International University Board of Trustees is a well-known figure in South Carolina government, and is well-known around the world for his outreach to the nations.

David M. Beasley served as governor of South Carolina from 1995-1999. But his career in government began in 1979 when he was elected to the South Carolina House of Representatives where he served in various leadership positions until 1992. Born in Lamar, S.C., Beasley earned a bachelor's degree and a law degree from the University of South Carolina.

During his term as governor, Beasley led delegations on economic development and trade missions throughout Asia, Europe, and Africa, resulting in the recruitment or expansion of more than 400 large corporations to South Carolina and $22 billion in new investment.

After leaving office, Beasley served as a fellow at the Harvard University Kennedy School of Government. In 2002, he led a 21-person delegation focused on economic development to Tunisia. His experience in international business relations led him to cofound the Center for Global Strategies, Ltd (CGS) in 2005. CGS integrates peoples worldwide into the global economy by connecting them with experienced professionals and coaches, while at the same time establishing cross-cultural ties of friendship, investment, trade, exchange of ideas, peace and understanding. Beasley serves as chairman of the board at CGS.

"His heart for God, as well as his knowledge of Scripture and apologetics, adds great value to our superb board of trustees," Jones said.

Beasley was voted to the board at the May meeting of the CIU Board of Trustees.