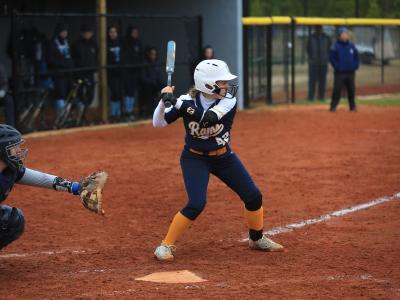 An old baseball song begins: ‘It’s a beautiful day for a ball game.” Actually, the weather was rather miserable as the Columbia International University Lady Rams played their first intercollegiate home softball game in school history. But the outcome was indeed beautiful as the Rams defeated the Piedmont International University Bruins 6-3 on a drizzly, 42 degree day.

Throwing out the ceremonial first pitch was CIU Chancellor and former CIU President Dr. Bill Jones. It was under Jones that CIU began intercollegiate athletics in 2012. After the game, Jones met with the Lady Rams in the outfield as they celebrated the win.

“I love it when a vision becomes reality and to see the quality of coaches that God has brought us and the quality of athletes, it’s a joy to be a part of CIU,” Jones said.

Head Softball Coach Sara Allen was all smiles after the game.

“It was kind of a sloppy day out here and it’s cold, so I was really proud them and their endurance throughout the game,” Allen said. “It’s not the best softball day. It takes a lot of mental composure to pull out a really good game.”

The game also included the first home run at the CIU softball field. Freshman Robyn Andrews sent a sixth inning shot over the left field fence to help seal the win. She says she hit two over the fence in practice during the week, but wasn’t sure she got all of it this time.

“I first I thought, ‘Why did the left fielder stop running?’and then I noticed it was over the fence and I was really excited,” Andrews said after the game.

Check out other “firsts” at the game from WLTX TV, and a full report from WLTX.

The Rams went on to win the second game of the doubleheader 7-4. Full stats on both games are on the Rams website. Check out this fun video of game highlights produced by Ben Rutkowski on YouTube.

Want to play for the CIU Rams? Find your sport at rams.com including CIU’s first baseball program.