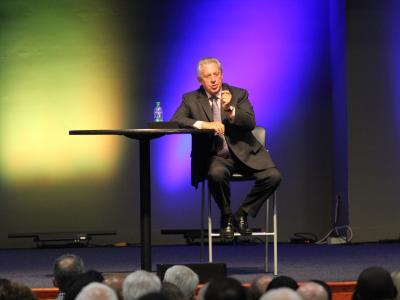 “My name is John and I am your friend.”

Maxwell is one of the most influential leadership experts in the world and a #1 New York Times bestselling author, coach, and speaker who has sold more than 32 million books in 50 languages.

Maxwell’s trip to Columbia also included a VIP lunch with Columbia area business leaders on the CIU campus, and a morning session at River Bluff High School with employees of First Community Bank.

CIU President Mark Smith introduced Maxwell as his friend and mentor saying, “This man helps those he trains to be leaders.”

Maxwell’s message at lunch centered on having a generous perspective on giving using the example of The Good Samaritan in the Bible who was willing to help a man in need.

“What I have is not mine and I’m going to manage it. I am God’s delivery boy.” Maxwell said.

“This is leadership training on the highest level,” Brown said. “John says it so well, God has given so much, and we want to give as well.”

At the afternoon leadership forum attended by a host of CIU students, Maxwell engaged the Christians in the audience with advice on how to add value to people and be salt and light in a dark world.

“The salt makes thing better and the light makes things brighter.” Maxwell said. “Hang out with non-believers. Change comes from the inside out and from the upside down. Make people thirsty and hungry for God.”

“I loved it,” said CIU freshman and business student Christina Brown. “It was a lot more faith- based than what I thought it would be. We forget to be friends with non-believers and that the way to have passion (for their salvation) is to spend time with them.”

At the end of his lecture, Maxwell invited people who did not know God to pray to meet Him for the first time.

“The reason people do not have a relationship with God is because they have a poor picture of God,” Maxwell said.

After summarizing three poor views of God as a wall (hard to get over), a stairway (good works to the top) and a garbage pile (insurmountable sin), Maxwell said instead, “Picture God as a doorway. He would like to start a relationship with you. You may be 1,000 steps from God, but he will take 999 steps toward you. You just need to take one.”

While Maxwell trains business and government leaders around the world for leadership, he said there is something he enjoys more.

“My favorite part of what I do is adding value to people and seeing that investment’s impact over the years,” Maxwell added. “I love bringing people to Christ. It’s my number one passion.”