A Lifetime Devoted to the Christian Mission Field 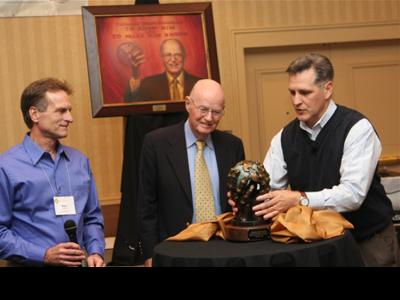 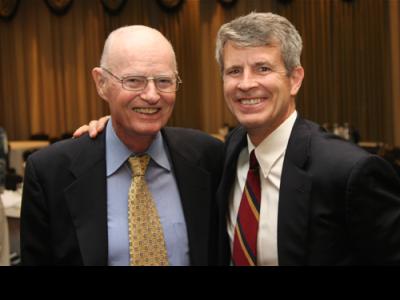 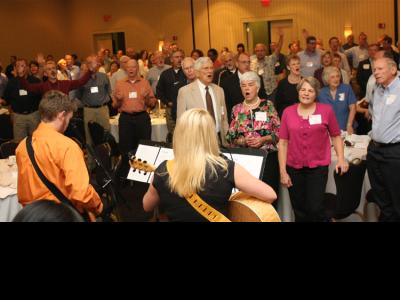 One of the nation's largest evangelical mission organizations has honored Columbia International University's president emeritus with the 2010 Lifetime of Service Award.

The honor went to McQuilkin for his 12 years of service as a missionary to Japan, 22 years as president of CIU, authorship of seven books, and as an international speaker. At age 83, McQuilkin continues a busy schedule of speaking engagements. McQuilkin is the son of CIU's first president Robert C. McQuilkin.

"In presenting this award we celebrate the faithfulness of God as evidenced in a lifetime of service to the cause of global mission," said Steve Moore, president and CEO of The Mission Exchange. "Dr. McQuilkin gives us a real-life portrait of what it looks like to finish well."

McQuilkin was presented with a sculptured bust of hands holding a globe.

In accepting the award, McQuilkin said that he was at first "distressed" and "embarrassed" by the honor because he said there are many other people who are more deserving "and not a few in this room," he told a banquet hall of over 300 people.

But McQuilkin said he eventually realized that the award was not about him, but about "an institution" - Columbia International University.

"This is about an institution that has, for almost a century, sent thousands and thousands of missionaries around the world," McQuilkin said.

"So, both CIU and I tonight join with Isaiah in saying, 'All that we have accomplished, you have done,'" McQuilkin continued pointing upward. "And so, to the greatest missionary of all time, Jesus the Christ be all honor and glory."

There were nearly 50 CIU alumni in attendance for the award ceremony. Among them was Ernie Hack, who was a student leader in 1968 when McQuilkin left the mission field of Japan to become president of CIU, then called Columbia Bible College. Hack says he met with McQuilkin weekly to discuss issues on campus. He remembers McQuilkin praying with him during every meeting.

"That impressed me," Hack recalled. "We would get down on our knees and pray."

During the ceremony McQuilkin was described as a man of passion, especially when it came to the Great Commission. Hack says he saw that passion in McQuilkin.

"He has a very quiet sort of demeanor about him, especially in face-to-face conversation," Hack said. "(But) his burden would be - how do we promote the mission and the vision to the students."

Current CIU President Bill Jones was presented with an oil painting of McQuilkin with CIU's motto in the background: "To know Him and to make Him known."

It was an emotional night for many including Jones who considers McQuilkin a mentor. Fighting back tears Jones looked at McQuilkin and said, "Thank you friend, for being a role model."

Jones then addressed the crowd.

"The DNA in our university is from Dr. McQuilkin."

To see a video on the life of Robertson McQuilkin that was shown at the event go to: https://www.youtube.com/user/ciugrowth

To view the presentation of the Lifetime of Service award go to: